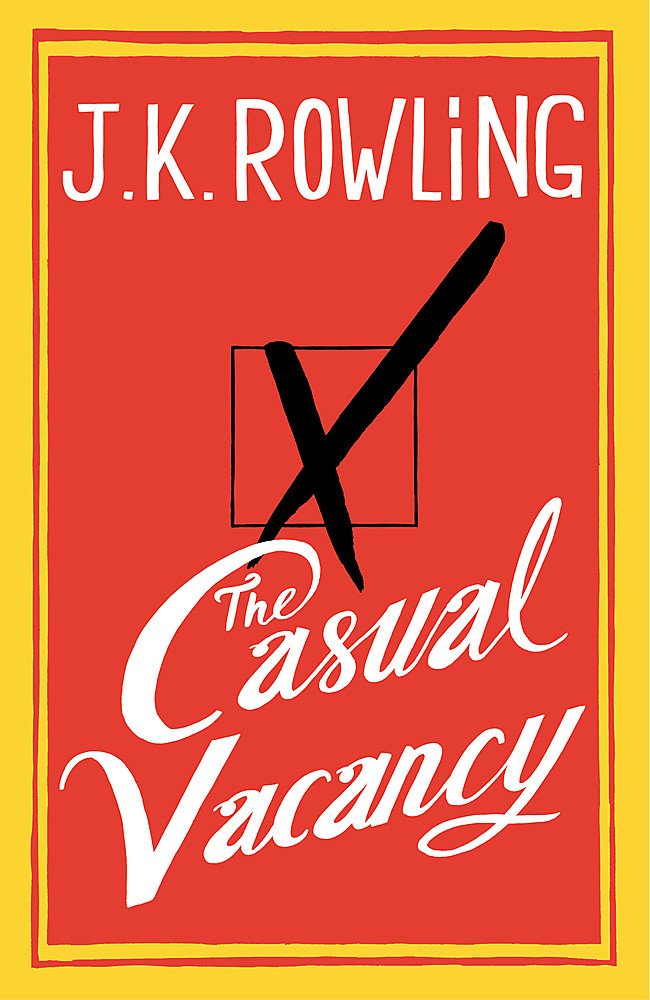 J. K. Rowling has to one of the world’s best-known children’s authors, the Harry Potter series is still going strong today and I loved the dark and magically surreal enthralling fairy-tale, The Christmas Pig. But she has also turned her hand to writing adult novels and the first book written after the Harry Potter series was The Casual Vacancy (published in 2012) which I have just got around to reading and it is a big departure from Hogwarts and the world of witches and wizards.

With Hogwarts behind us, we set off to the idyllic picturesque west country town of Pagford, a town of cottages with hanging baskets surrounding a beautiful town square and war memorial, a place where everybody knows each other, on the surface it is the ideal place to live. But Pagford is about to reveal all its nasty little secrets – hostility and resentment, snobbery, racism, bullying, drug misuse, self-harm, sexual frustration and lots more.

Barry Fairbrother is a much-loved parish councillor so when he drops down dead in his early forties the town of Pagford is in shock. But the shock is only going to be short-term as his death leaves a vacated seat on the parish council, a casual vacancy, and it is going to start a series of nasty events that stretch back decades. The death of Barry Fairweather is the catalyst for a civil war in Pagford now that an election is to take place, an election nobody wanted but one that is to be fraught with passion, scandalous accusations and revealed secrets. When posts start appearing on the council website from “the Ghost of Barry Fairbrother” reporting damaging, but very accurate, accusations regarding council members and those standing for election, this small town is about to erupt into its own civil war like it’s never known before.

Overall, this is a really interesting and enjoyable black comedy / tragicomedy that is most definitely an adult read. Whilst it starts out as a novel about small town local politics and a parish election it transforms into a story of real-world issues made up of intertwining plots and subplots that feature lots of foul and abusive language, drugs, sex, bullying and self-harm, domestic abuse, racism and a lot of snobbery pitching rich against the poor, all the failings of the human condition.

The cast of characters is excellent, with none of them particularly likeable or even nice people. On the surface, from the beginning of the book most of the characters are fine, upstanding people but once you delve deeper into the story their secrets are slowly revealed, exposing their miserable and unhappy lives featuring troubled families, nastiness, hatred and jealousies. For me, all the characters were equally as good – from the council estate teenage tearaway to the delicatessen/café-owning, man-of-the-people and larger than life parish councillor.

Whilst the stories of the different characters are all very much different, J. K. Rowling has done an excellent job of weaving them together so that they all fit together like a completed jigsaw creating a tale that shows the traits of small towns everywhere once you start scratching at the surface.

My only small criticism is that all times it seemed overly wordy and could possibly benefit from a re-edit to trim it down a little bit.

An enjoyable well-crafted story packed with vivid characters that leap off the page. It takes a bit of time to get into but finishes with a bang and is definitely a book for adult readers. If you are looking for a book that is something a bit different, then The Casual Vacancy is a humorous and enjoyable read – who would have thought that small town politics could be so interesting. A very clever story.

A Snowflake’s Guide to Christmas by Dave Skinner Review

The Big Book of Silly Jokes for Kids 2 by Carole P. Roman Review

The Mammy by Brendan O’Carroll Review