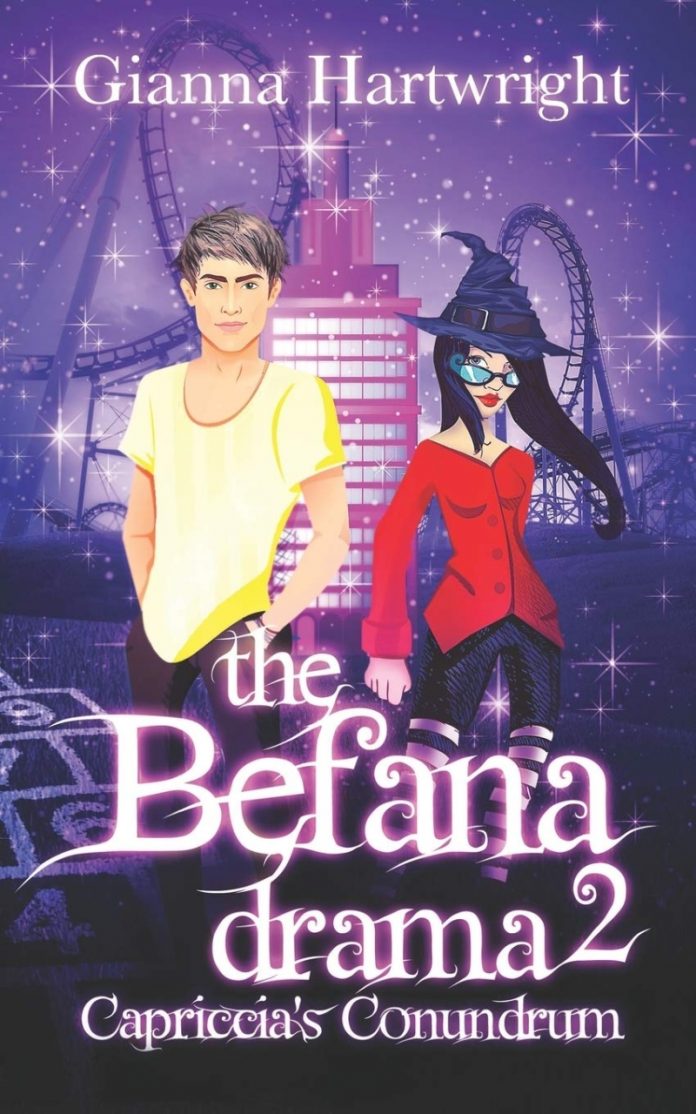 Kids love a bit of adventure in their stories, along with magic, witches, wizards and a variety of other interesting and exciting characters. At Christmas time, kids love to read about Santa Claus and his reindeers, but what if there was another Very Important Present Bringer (VIPB)? In The Befana Drama by Gianna Hartwright we were introduced to such a character in Bef, Italy’s own VIPB. I loved this book (despite being a lot older than the target market of 9+), it was “Favoloso” as the loveable Bef would say. Now we are back for the second instalment in the series – The Befana Drama 2: Capriccia’s Conundrum.

Readers of the first book in The Befana Drama series will be fully aware that the story was a great adrenaline-filled, adventure story packed with witches, magic, elves, a reindeer whisperer, magical beings and creatures, and even a boy band that kept the attention and interest of its audience. In Capriccia’s Conundrum it still keeps all of these and comes with a theme park added into the mix.

Let’s recap the first book, although I am sure that you have all read it! The Befana, as we all know, is a witch from Italy and is the countries Very Important Present Bringer, just like Santa. But with competition from Santa, she has to save her present bringing patch in Italy from being overtaken by him and this resulted in her getting rid of Capriccia, Santa’s wife.

So here we arrive at book #2 in the series and Capriccia wants her old life back and is seeking revenge on the now younger Bef.

Bef has saved her present bringing patch in Italy. She is now much younger and even more popular than she ever was before. So what do you do when you reach that height of fame? You open your own theme park of course! Bef has decided to open her own theme park and she is going to name it Befland. Her aim is for Befland to have the best and most exciting rides in the world.

Building a theme park is a lot of hard work and whilst Bef is focusing on building it with the help of her friends and Dubai boy Band, The Three Kings, her enemy Capriccia is also making plans. Capriccia has teamed up with Bernhardt Bürstenfrisür – The Most Fearsome Feller in Folklore and the hopscotch obsessed fairy, Fiery Tina. Both also have centuries old grudges against Bef. They believe that if they can just get rid of Bef they will not only get their (un)just revenge but in the process gain their very own present bringing patches. It would also mean that Capriccia could return to her pink monstrosity; the Casa of Contentments, which houses her large collection of shoes, clothes and perfumes.

Now, Capriccia is quite dim and not the sharpest pencil in the box. First, she has to be trained in magic by Fiery Tina, which would mean that Fiery Tina would have stop playing hopscotch long enough to teach her. Then between Capricca, Fiery Tina and Bernhardt they decide on a conundrum to destroy Bef and play a game where one-by-one the people Bef loves most are snatched and turned to stone – this is known as statuefication. This is all done in the hope that Bef will solve the final conundrum and be ruined.

Will Bef be able to stop her 3 enemies? Will Sly or Lars come to her rescue? Or will Bef turn to stone or turn back into the old haggard witch she once was? You will have to read the book to find out (you won’t be disappointed that you did).

Overall, Capriccia’s Conundrum is an excellent, well-written story that is filled with brilliant characters that are vividly brought to life. You have Bef, Bernhardt, Capriccia, Fiery Tina, Lars the Reindeer Whisper, Erik the Enraged, the Gnomes of Zurich and many more that all have their own unique qualities, and you will either love or loathe them, but you couldn’t do without them. All of the characters are beautifully described and add depth to the story.

I still haven’t decided if I prefer this book over the first one in the series as they are both so good but are different stories with each having their own qualities.

Capriccia’s Conundrum is a fun and exciting, thrilling magical adventure that travels the world (we visit Italy, Germany, Lapland and even Hollywood). Children, parents and adult readers will love this fantasy adventure. It is a great book for children to read by themselves, for parents to read to their children or to read together.

Baboon on the Moon by Claire Bates Review