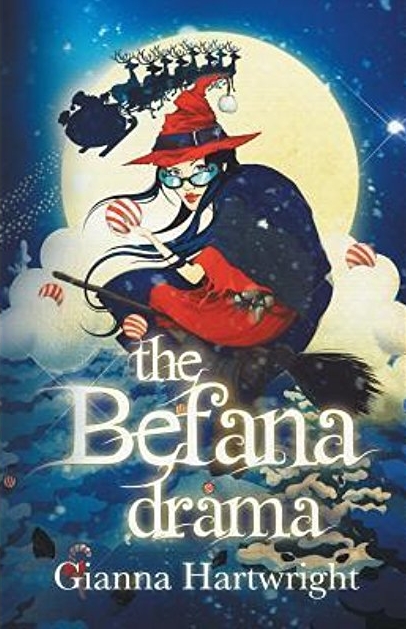 The Befana is the Italian version of Santa Claus, a VIPB (Very Important Present Bringer). She delivers her presents to children in Italy, and children of Italian descent around the world, on 5 January for her festival on the 6 January. She is a good, proud and clean witch who leaves candy for good children and coal for the bad children. She believes in rewarding children for their good behaviour throughout the year while also punishing the bad (who Santa gives nothing to).

When Bef (Befana) finds out that her festival is being downgraded, her postbox covered up and told that Santa (her once fiancé) will be taking over her patch, she sets out on a path of revenge and vows to stop him while she delivers candy and coal to all the children off the world. She is out for revenge, and hopes to defeat Santa, but will require a little help on her quests.

As she sets off around the world, she enlists the help of a boy band (descendants of the Three Wise Men – a boy band called The Three Kings), Old Father Time, an exiled tailor and the world’s best reindeer whisperer. With their help of gold and promoting Bef to the world she hopes she can become the world’s best VIPB.

She has to travel to Santa’s wonderland, gain entry to his post office and disrupt his present bringing activities, all while dealing with Santa’s shopaholic wife, Capriccia. But she also makes enemies in the form of Capriccia and the 81st elf in Santa’s post office.

Overall, The Befana Drama is a wonderfully written children’s novel. It is well thought out, has great vivid descriptions of all characters and the world’s they live in. The excitement never ends and although aimed at children 8+, adults will love it too. It is a fun and exciting read and a great book for Christmas.

A great story that travels around the world taking in places such as Italy, Germany, Dubai, Iceland, Russia and USA meeting great characters that will grab hold and keep a tight grip on any child’s imagination.

The Befana Drama is magical or as our friend Bef would say “Favoloso!” Hold tight onto your broomsticks for this adventure around the world.

Not Yet A Yeti by Lou Treleaven Review