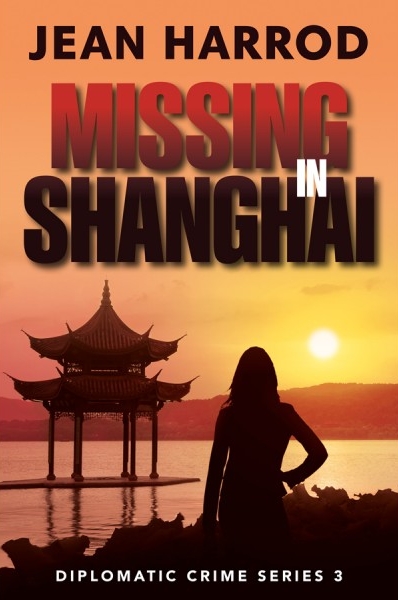 Missing in Shanghai is the third instalment in the Diplomatic Crime Series written by former British diplomat Jean Harrod.

British diplomat Jess Turner is back and with a new assignment that will put her life at risk! After some deadly assignments in Australia and the tiny Caribbean Turks and Caicos Islands, Jess has returned to London and is now working on the China desk at the Foreign and Commonwealth Office (FCO).

She has been working on the China desk for 6 months preparing for the state visit of the China Premier. She has to make sure that it all runs smoothly and goes without a hitch. All is well until her opposite number in the Chinese embassy asks to speak to her in private regarding a missing British diplomat in Shanghai. Marianne Henderson went missing 34 years ago after the apparent suicide (or was it murder?) of the British Ambassador in China, she hasn’t been seen or heard of since?

As the visit of the Chinese delegation approaches, tensions are rising, her boss at the FCO has committed suicide and her Chinese counterpart is missing! With no evidence of the events that took place in Shanghai 1984, Jess starts asking questions to try and uncover the truth, but she is warned off looking into in further. She soon gets caught up in events that she has now control over and will lead her into to very grave danger.

Meanwhile, Australian police detective, and a friend of Jess, DI Tom Sangster is also in London working for the Met Police. He has on secondment to the armed diplomatic protection squad for the Chinese Premier visit. He and Jess meet up and he is soon involved in the case, just like old times. He is also soon warned off looking into the missing diplomat.

With what is starting to look like a cover up at the highest levels, Jess and Tom and soon in lots of danger, but can they find out what really happened in Shanghai, why it was covered up and who was responsible?

Overall, Missing in Shanghai is another great instalment in the Diplomatic Crime Series. As with the previous 2 novels in the series it is fast-paced, well-written, exciting and thrilling. As a former British Diplomat (who has worked in Shanghai), the authors experiences of the diplomatic services show in the writing in an authoritative, knowledgeable and believable way.

Jess and Tom are great characters. The story flows very well and is extremely hard to put down. It is set in present day London and 1984 Shanghai and switches back and forth between the 2 eras with ease.

Missing in Shanghai is a captivating thriller of entrapment, betrayal, espionage and murder.