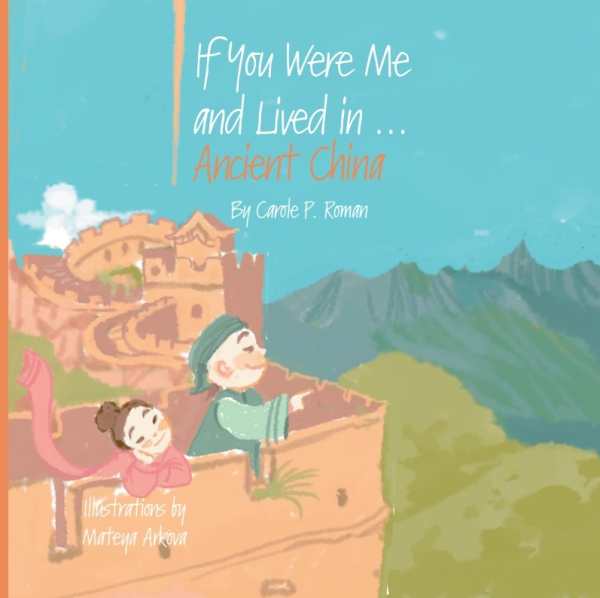 We have already visited the different civilisations of Renaissance Italy, the Middle Ages and the Mayan Empire. For this review we are heading east to one of the world’s four ancient civilisations in If You Were Me and Lived in… Ancient China, written by Carole P. Roman and illustrated by Mateya Arkova.

Carole P. Roman is an award-winning author and has written a fabulous series that looks at different countries and their cultures in the If You Were Me and Lived in… series. They started off introducing children aged 4-8 years old to other countries and cultures and later expanded, adding in ancient civilisations, suitable for 8-11 years old.

In this book, we travel back to the year 150 AD, nearly 1900 years ago to Ancient China, one of the world’s oldest and longest lasting civilisations. The story is told through the eyes of a child describing what it would be like if you, the reader, lived during the Han dynasty era.

Children, and indeed any adults reading the book, can learn what a dynasty is, about government, the invention of paper, the creation of porcelain, the creation and production of silk, the Silk Road trade route, how people addressed each other, how education was important for boys but not for girls. You will also learn about children’s names, occupations, housing, food, religion, clothing, hair styles, slavery, festivals and even their superstitions.

At the end of the book there are some pages about important people in Ancient China, such as Ban Zhao – the first-known Chinese historian and Cai Lun – regarded as the person that invented paper and the paper making process. These all have a short biography paragraph each of who they were and what they did.

There is also a glossary at the back that lists the unfamiliar words, their meaning and child-friendly pronunciations.

Throughout the book are full page illustrations by the very talented Mateya Arkova, who has illustrated several of Roman’s books. With their pastel colours, cartoon style with slightly fuzzy edges they are very unique but lend a lot to the story by clearly showing what is happening.

Overall, If You Were Me and Lived in… Ancient China is an excellent book to introduce children, aged 8 years and upwards, to an ancient civilisation, their traditions and customs, and even their accomplishments that we still use today. It shows a lot about their culture then and how if differs from ours today in a lot of respects.

It is never too early to introduce children to different cultures and world history. Books like these can go a long way in helping children respect a diverse culture and understand more about other people and their different cultures.

If You Were Me and Live in… Ancient China is a very interesting read, presented in a very child-friendly way. Whilst it only gives a brief insight into a world 1900 years ago, the book is packed with lots of different pieces of information that children will enjoy.

If You Were Me and Lived in… Poland by Carole P....