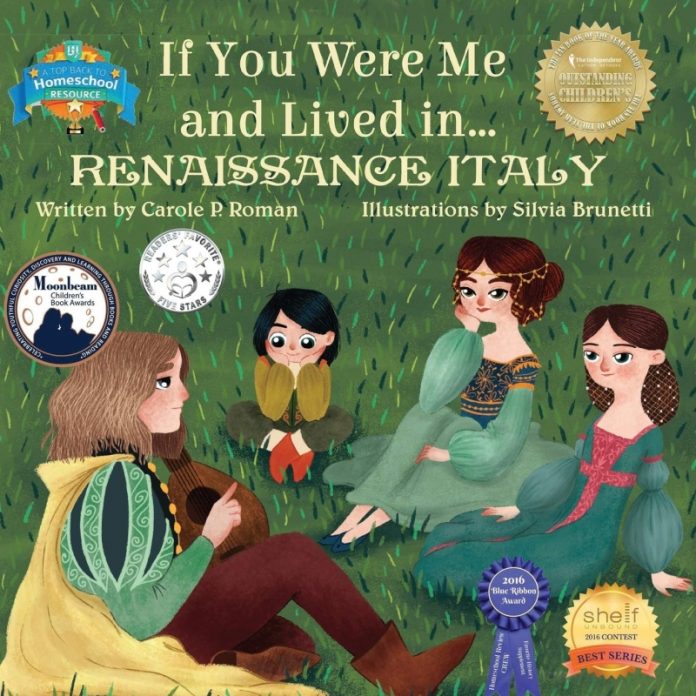 Throughout history there have been plenty of time periods that have stamped their mark on the world. Whilst they may be interesting periods for us adults who have an interest in such things to read about, getting kids to read about time periods in history and ancient civilisations can be a bit of a struggle, as soon as the word history or education is mentioned their minds seem to automatically switch to “but its boring” mode. History is anything but and Carole P. Roman has written a series of children’s books that introduces history in a very different format.

Carole P. Roman is an award-winning author and has written a fabulous series that looks at different countries and their cultures in the If You Were Me and Lived in… series. Now she has expanded on that series and added ancient civilisations.

The Renaissance (Rebirth in French) occurred after the Middle Ages and was the reawakening of human creativity and this book takes us into Florence in the year 1483.

Whilst reading through this book, children will learn about the art and influential people of the time alongside what occupations people had, their homes, their education (girls were given a lesser one than the boys), what food and drink they liked to consume, and how they liked to dress.

There were lots of famous artists to come out of the Renaissance era from Michelangelo, Leonardo Da Vinci and Raphael as well as famous names that we still learn about today in Galileo and Machiavelli. This book will have a brief look at them and others including one of the most famous female artists of the time, Artemesisia Gentileschi.

Overall, If You Were Me and Lived in… Renaissance Italy is a well-researched book that will engage its young readers. It is packed with lots of snippets of information and facts allowing young historians to gain a brief insight into what the era was like, told from the point of view of a child explaining what it would be like if you, the reader, lived there.

The illustrations by Silvia Brunetti, with their muted colours, that accompany the text fit in with the era perfectly with the attention to detail of the housing, clothing and food.

On the negative side, there are a few spelling mistakes in this book (at least in the copy I received for review and I don’t mean the American spellings of words like centre/center). This isn’t the standard I have come to expect from this author, but it doesn’t change the meaning of the text and is a slight annoyance.

As we have seen in the other books in this series, there are words that are going to hard for children to pronounce, especially the Italian ones, but again there is a child-friendly word pronunciation next to each unfamiliar word as well as in the glossary at the back.

Also at the back of the book are a few pages about famous people of that era with a brief description of what they accomplished and what they are famous for.

If You Were Me and Lived in… Renaissance Italy is an interesting and child-friendly look at the era, the few spelling mistakes just let it down a little bit.