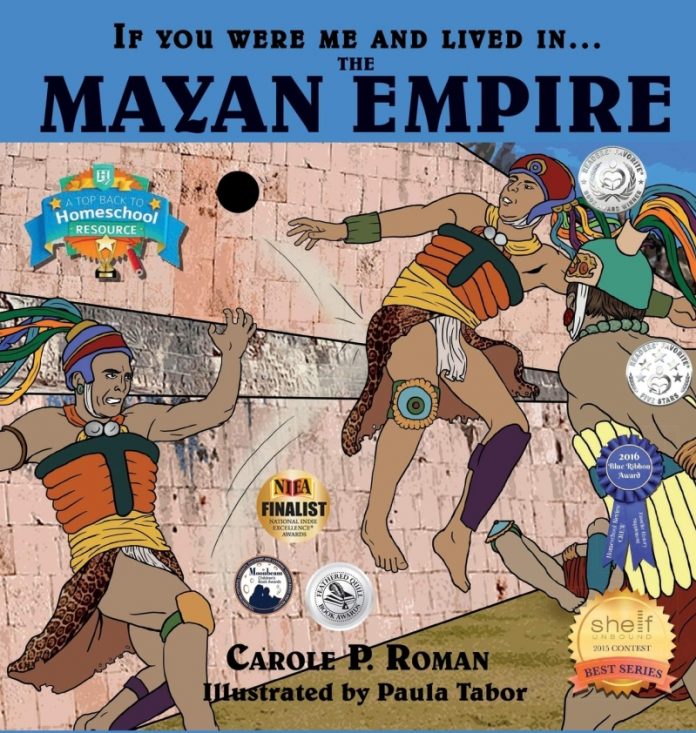 Children should be encouraged to read at the earliest opportunity, starting with reading them bedtime stories. Children’s picture books can be fun and entertaining, and a lot of the time have very subtle messages in them that children can learn from. But reading about history and the past sounds boring and why would any young children want to invest their time reading about the past, full of facts and figures? Well, history is a wonderful thing, good or bad it has shaped the way that the citizens of the world live today. When history books are written with kids in mind, they can be fun and entertaining as well as delivering the facts, as Carole P. Roman has achieved in her series of world culture and ancient civilisations books.

For those asking why children would need to learn about ancient history and civilisations it is important for a well-rounded education, good for their conceptual development, they can learn and understand different eras and how they have changed over time and is excellent for their understanding of the world and society in general. It helps develop an understanding of the world and identity.

Carole P. Roman is an award-winning author and has written a fabulous series that looks at different countries and their cultures in the If You Were Me and Lived in… series. Now she has expanded on that series and added ancient civilisations.

We have read a few of If You Were Me and Lived In… country and culture series, which are aimed at children as young as four. With this civilisations addition to the series we feel that they are aimed at slightly older children (maybe six upwards) as there are a lot more pages in these books and are jam packed with more interesting information.

We are going to take a step (or quite a few) back in time and history and are going to take a look at If You Were Me and Lived in… The Mayan Empire with this time-travelling children’s educational picture book and learn more about this ancient and fascinating civilisation.

So, the Mayan Empire, it doesn’t exist today so with this book we are going to step back 1,500 years in time and see what it was like to be a child in now what we know as the Yucatan Peninsula, Mexico was really like.

Mayan civilisation goes back nearly 4,000 years, traced back to 1800 BC in what we now know as Mexico, Guatemala, Belize, Honduras and El Salvador. These countries still have many Mayan descendants, still speaking the Mayan language.

The story is told through from the point of view of a child and tells you what it would have been like if you lived in a Mayan town in the year 572.

During the course of reading this book, children will learn that the Mayan’s were the only ancient American society with a written account of their history, how they would record their accomplishments and what materials they would use to do so. They will also learn how cities grew, who ruled them, popular children’s names of the time, what jobs they did, learn more about their monuments like the pyramids (kids, pyramids are not just in Egypt) and what they built their homes from. Children will also learn how their family units worked, including how they lived close to each other and how land was split (if you were a girl and had no brothers you weren’t allowed to inherit the land), and how women in general were treated in Mayan society.

There is also a lot to be gleaned from the book, such as how they grew food, how they hunted, how they cooked, their diet, how that made clothes and what they wore, what tools they would have used, how taxes were in existence even then, their bizarre concept of beauty (including how they would reshape the heads of their newborn babies), your place in society, the bartering system used as they had no coin currency, the building of complex cities, education (but only for the noble people), their written language that is made up of over 800 symbols, and lots more.

Overall, this is a very informative book about the Mayan Empire that is absolutely packed with very interesting snippets of facts, told in an easy-to-read way.  The book is laid out as a page of text followed by a full-page colourful image, by Paula Tabor. The story is told in a way that is telling the reader what it would be liked if they lived there, the pronoun of ‘you’ is used a lot to keep the reader engaged.

The book also encourages the reader to think about what it would be like in Mayan society by asking questions along the way, such as “What does this tell you about a woman’s position in Mayan society?” An excellent way to not only test comprehension but can also lead to some interesting discussions.

And it doesn’t stop when you reach the end of the book either as there are pages with Mayan contributions to the world (accurate calendars, brain surgery, maths and astronomy amongst others), famous names in Mayan culture and even a glossary of terms used throughout the book with a brief description of the word and a child-friendly way to pronounce it (e.g. indigenous is shown as in-dij-uh-nuhs).

This is a very factual and educational fun book to learn more about an ancient civilisation and their culture. It doesn’t overwhelm the reader with facts and figures but gives just enough to give a brief insight from which you can build a base of knowledge and maybe go on to learn more about.

A concise guide to learn about the Mayan Empire and their way of life that children will enjoy reading.

If You Were Me and Lived in… Viking Europe by Carole...