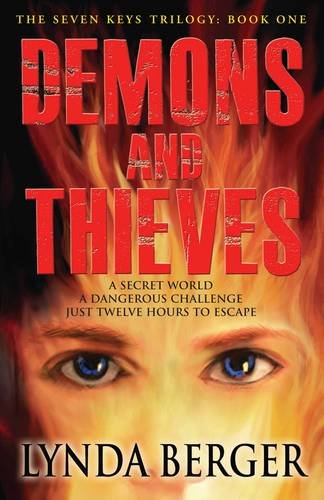 I have been enjoying reading books aimed at the YA (Young Adult) market recently, there really are some excellent books to be read. Demons and Thieves, by Lynda Berger, is a fantasy adventure for the young adult market and is the first book in the Seven Keys trilogy.

Tad Bailey is troubled teenager, he is only fourteen years old. When he was eleven years old his older brother, Nick, and his grandpa, Sam, were both tragically killed in an accident and ever since then Tad has had issues. Now at fourteen life isn’t much better as his dog has gone missing, his parents are constantly arguing and he is being bullied at school. He has no idea that his problems were due to the ‘Shadows’ – dark, invisible forces which have been playing with his life: causing him pain, stealing his hope, destroying any chance of happiness.

He soon finds himself transported to the gate of another world where only the Seven Keys can give him the power to defeat the Shadows, who have been plaguing his life since he was 11. He must enter into a quest to retrieve the Seven Keys and banish the Shadows forever and get his life back on track.

Demons and Thieves is the first book in the trilogy and follows the teenage Tad on his quest to find the first three of the seven keys that he needs – they need to be won in a deadly challenge beyond the Gate, the entrance to a secret and highly dangerous universe. He only has twelve hours to complete his challenge before he becomes lost in the three worlds of Shiladu. With the help of two helper dwarfs, Towards and Away, he must battle his own inner demons and fears to find the first three keys he needs to get back to the Gate and his own world or be lost forever.

Overall, Lynda Berger’s Demons and Thieves is a well-written, exciting book and a compelling read filled with lots of dangerous situations, secret worlds, mad magicians, bullies, demons, thieves, and other mysterious beasts and beings that add plenty of adventure and exhilaration to the story. It is attention grabbing and thrilling from beginning to end. With its short chapters it is a relatively fast read and is perfect for the younger end of the YA market with its fantasy adventure.

Lynda Berger has created an inspiring alternative fantasy world of beauty, darkness, adventure, danger and magic where one lost and troubled boy must face his own demons, confronting them head on. He needs to do the right thing not only for himself but for other people that he encounters along the way.

With a vast array of wonderful characters, page after page of exciting, exhilarating and electrifying action, adventure and lots of twists and turns this is a great read that teenagers and young adults will enjoy. I cannot wait to read the next instalment.

A truly excellent inspirational novel that readers will definitely enjoy.