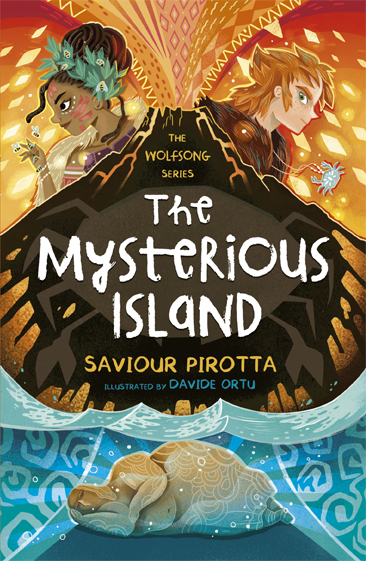 I have really been enjoying The Wolfsong Series of books by Saviour Pirotta, junior fiction adventure stories for children. They are a series of books set in the Stone Age, circa 2500BC, in the Neolithic era. It is a four book series and I have read the first two books, The Stolen Spear and The Whispering Stones and was really looking forward to reading the recently published third book in the series – The Mysterious Island.

In Book 1, The Stolen Spear, we were first introduced to Wolf, a young boy who had to go off to a faraway land to retrieve a stolen spear. Not only did he complete his mission, but he also found himself and changed his life.

In Book 2, The Whispering Stones, we continue the story and after successfully delivering the stolen spear, Wolf continues on his journey using his dreams and a special amulet on his way to becoming a shaman.

In Book 3, The Mysterious Island, the story continues across a great distance. Rain, Wolf’s rival and enemy, has stolen Wolf’s special amulet and he wants it back. Wolf and Crow set out across land and sea, through mountains filled with fire, tracking Rain to the mysterious island at the centre of the world.

Overall, the more I read of The Wolfsong Series the better and grittier it is getting, a real adventure across the history of the world.

The Mysterious Island is packed full of mystery, suspense and thrills as Wolf and Crow make their way from The Whispering Stones (Stone Henge), through The Cave of the Dancing Animals (inspired by the caves at Lascaux, France and its hundreds of cave paintings), on to The Growling Island (better known as Sicily, Italy) with its Fire Mountain (Mount Etna) before reaching their final destination, where great powers reside, on The Island at the Centre of The Earth (what we would know today as Malta).

As you progress through the exciting chapters (there are 16), Wolf and Crow meet new characters along the way and have to deal with complicated issues such as friendship, conflict, jealousy, courage, anger and acceptance, especially with the character of Wolf who is starting to feel lots of anger towards Rain. The book not only looks at the issues that present themselves but how the characters deal with them.

Whilst the story is a work of fiction, some of the places encountered on their journey are real, like The Growling Island that we know today as Sicily in Italy – it is call Growling Island because of the noise of its active volcano, Fire Mountain or Mount Etna as we know it. The Cave of the Dancing Animals is also based on a real cave in France that has over 600 ancient cave paintings. And The Island at the Centre of the Earth is Malta, which is steeped in history. The Island at the Centre of the Earth is home to The Bee Children (named because Malta is the Greek word for honey). The places featured are all steeped in history and if you do a bit of research on each place you would learn quite a bit about some of the world’s most historical landmarks, buildings, monuments and temples.

Anyway, I digress, back to the story. The Mysterious Island is a great story which is aimed at 7-9 year olds, although because to some of the themes I would probably say at the upper end of that range. It is a fast-paced adventure with enough intrigue and suspense to keep the attention of its young readers. The characters are all excellent, their names alone will keep children interested.

The Mysterious Island is a brilliant continuation in The Wolfsong series and as the story progresses is just getting better and better. It is a story that will hold the attention of the reader with its fast-paced and exciting adventure. As Wolf and Crow enter different lands the story evolves as does the tools and technology they come across e.g. Wolf is used to using stone and flint tools but as they travel to other lands they find how they are advancing, especially with the discovery and use of mixing copper and tin to make bronze tools, like the bronze knife that Crow so desperately wants.

Throughout the book are some excellent monochrome drawings to break up the text. These are really well drawn by the illustrator Davide Ortu and do a great job of helping to visualise what is happening throughout the story.

And for parents/carers/teachers there are some interesting discussion points at the back of the book to help discuss the themes featured through the book and help test the comprehension of the story.

A really good book and series that children will love, especially as it features really strong male and female lead characters so that everybody can relate to their different issues.

Jesper Jinx and the Mouse Mayhem by Marko Kitti Review