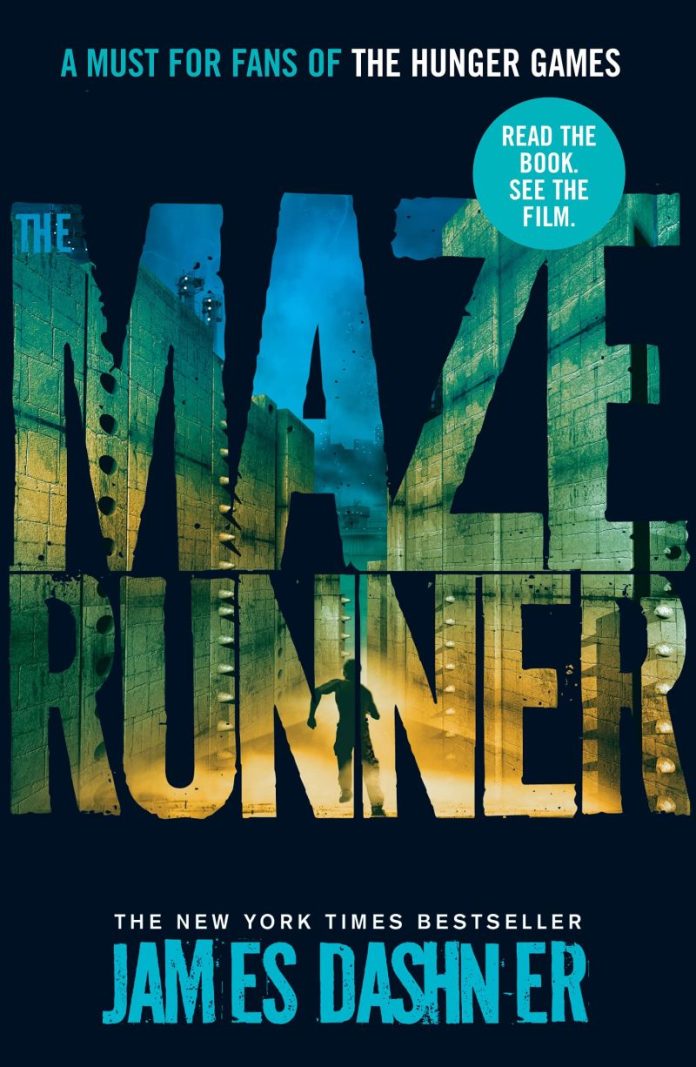 Dystopian fiction for young adult readers can be an exciting genre. Take The Hunger Games by Suzanne Collins for example, an exciting trilogy of books that got turned into films and were big hits – the books are so much better than the films. Another trilogy in the same vein is The Maze Runner by James Dashner – this has also been turned into a movie which pales in comparison to the book (the book explains so much more).

The Maze Runner is the first book in a series of young adult dystopian fiction novels, The Maze Runner trilogy plus two prequels, written by James Dashner. The book was first published in 2009.

A sixteen year old boy awakens in in an elevator, “The Box”, that is just coming to a juddering halt.  He has no memory of anything except that his name is Thomas. He exits into a strange new world where the only inhabitants are all teenage boys. His new home is surrounded on all sides by a stone wall hundreds of feet high. In the centre of each wall is a small opening, doors to passageways that lead out of the square space he now finds himself in. His new home is called “The Glade” and its inhabitants are called “Gladers”.

For two years a group of teenage boys have been living in The Glade, surrounded by four high walls with a door in each wall that closes each night. Beyond the walls is The Maze, patrolled by evil slug-like monsters of flesh, robotics and electronics known as Grievers. The boys have built their own community, growing their own food, raising their own animals and supplies are sent up regularly and once a month a newbie arrives, always called Greenie until a new one arrives into The Glade.

No one has any memory of how they got they or their life before arriving, they remember how to speak and memories of how to do things but have no personal memories at all. As they are surrounded by a maze, they think solving this is their way out and have a team of runners that go out every day to run the maze looking for a way out and to map it. It isn’t that simple as the walls move every night to change the configuration and the deadly biomechanical Grievers patrol it and small mechanical creatures, called “beetle blades” watch their every move. They Gladers believe they were sent there by the mystery “Creators” known as WICKED, for reasons unknown.

When Thomas arrives, things start to change. When Teresa, the only girl, arrives with the message “Everything is going to change” and a note saying “She’s the last one. Ever” the Gladers community starts to disintegrate. Thomas is believed to be the catalyst for all the new changes and everything going wrong and is treated with suspicion, especially when he becomes the first boy ever to survive the night in the Maze.

With the help of his friends, Teresa, Newt (second in charge of the Gladers), Minho (Keeper of the Maze Runners) and Chuck (the newbie before Thomas tasked with helping Thomas), he begins to solve the puzzle of the Maze to find their way out to hopefully a better life.

Overall, The Maze Runner is an action-packed puzzle adventure, with themes of survival, identity, friendship and human intelligence, where everyone must work together to solve the mystery of the maze – are they prisoners or pawns in an experiment?

A story of a rudimentary peaceful community with a hierarchy where leadership and working together has helped establish a system where children with no memories have managed to cobble together working farms, their own judiciary and an existence out of practically nothing, based on order and structure that works well for them until Thomas and Theresa arrive to change the dynamics.

The book doesn’t start at the beginning of the story. Thomas is thrust into an experiment that has already been running for two years. This means that you start off with lots of questions before you have even got into the story: who are the Gladers? Why are they there? Who put them there are for what reason? What is the purpose of the Maze? The answers to these questions start to slowly get answered as you progress through the book but aren’t fully answered (this is a series of five books so more is to be revealed as the series goes on to get the complete picture).

The characters are excellent. Thomas, the main protagonist, is inquisitive and intelligent and the supporting main cast of Chuck, Newt, Alby, Minho and Theresa are complex and interesting.

Readers will have to get used to some new language throughout the story. At first, it can be a bit confusing, but it doesn’t take long to get used to or figure out and soon becomes second nature and “normalised” with the children using their own form of slang, words like:

Although the novel is aimed at YA readers, adult readers will enjoy it too – it’s fascinating, engaging, entertaining with lots of suspense and tension. There are several interesting plot twists throughout the story to keep the story moving and bringing it over into the next book. It is a story that is very plot driven with fast-paced action. Character development could be better, and hopefully these progress throughout the other books in the series now that the story is starting to be established.

Written in the third person, you follow Thomas and his friends on a journey of discovery, rebellion and fighting to survive/escape. An exciting story of teenagers trying to fight the system and the unknown authoritarian figures of the “Creators”. Whilst there is violence and death throughout the story it isn’t gratuitous or graphic – enough to add power and thrills to the story without being outright scary.

If you like The Hunger Games, you will definitely enjoy The Maze Runner.  A dystopian sci-fi adventure novel that is exciting and unique that shows how friendships, leadership and community are important for a society to function. I am looking forward to reading the rest of the books in the series.