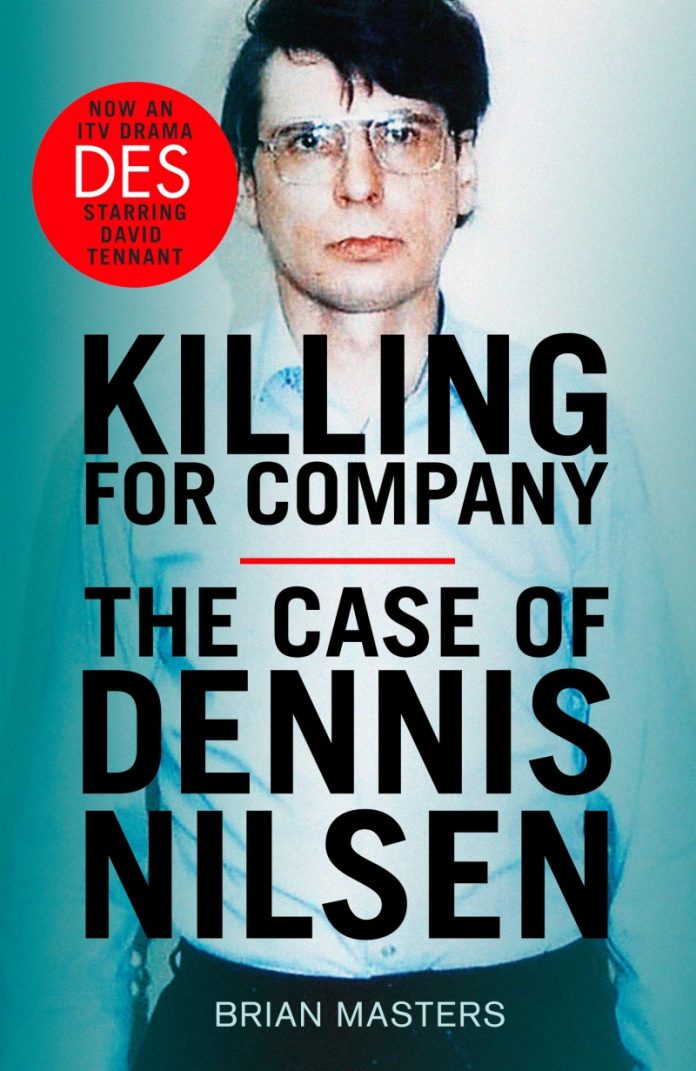 Serial killers have been part of popular culture since the 1970s, gaining media attention and the spotlight but have been around a lot longer, possibly starting in 1888 with Jack the Ripper. They have always been a fascination for many, including me, for many reasons including how their minds work and the reasoning behind their crimes, they are made of stuff that fiction writers wouldn’t dream of (and have inspired many of your favourite horror films).

In May 2018 one of these infamous serial killers died, resulting in people wanting to know more and him and his killing, leading to books and a television series about him (Des, starring David Tennant. If you haven’t seen it, it is a very good series that you should watch). So who is it? That would be Dennis Nilsen, who murdered at least 15 people and disposed of their bodies in the most gruesome fashion.

Killing for Company is the story of Dennis Nilsen and his murders. It is written by Brian Masters with Nilsen’s full cooperation after Master’s corresponded with him whilst Nilsen was in prison. The result is a fascinating, albeit gruesome, look at Nilsen’s life and crimes and what drove him to commit them.

For those that are unfamiliar with the story of Dennis Nilsen, an unassuming, quiet and quite boring man who was civil servant working for the job centre, on 9 February 1983 he was arrested at his Muswell Hill, London home (23 Cranley Gardens) after another tenant had complained of a bad smell in the house and it was traced back to human remains that were blocking the drains. When questioned by police Nilsen confessed, when asked by a detective “’Are we talking about one body or two?”, Nilsen’s shocking response was “’Fifteen or sixteen, since 1978. I’ll tell you everything”. He then went on over the next few days to give full and frank detail descriptions of the horrific murders of fifteen homosexual men, the dissecting of their bodies and the disposal of them over a four-year period, seeming quite relieved to do so.

Brian Masters has written a very good account of the life and killings of Dennis Nilsen, in full cooperation with the serial killer (one of the UK’s most horrific and prolific murderers), including writings from Nilsen himself. Using correspondence with Nilsen he has put together a unique, fascinating and interesting book that delves into the mind, life and crimes of an unassuming serial killer. Nilsen, whilst a bit odd and not very well liked, had the ability to go out and pick-up homosexual men, bring them home and kill them (not all of them) and quietly dispose of their bodies so they were never missed or found. He would then carry on with his life as normal.

Killing for Company is a fascinating read that is expertly and brilliantly told. It is quite detailed, making it riveting and disturbing. I felt at times that it strayed a bit off course, making it a bit slow going in places, especially when looking at Nilsen’s past from childhood to adulthood, but when looking at the book as a whole it did help to understand the drivers behind Nilsen a little bit more.

For true crime readers Killing for Company is definitely a must read and a fascinating look into the mind and behaviour of a mild-mannered, aloof, articulate and intelligent serial killer who just wanted company and killed for it, again and again.