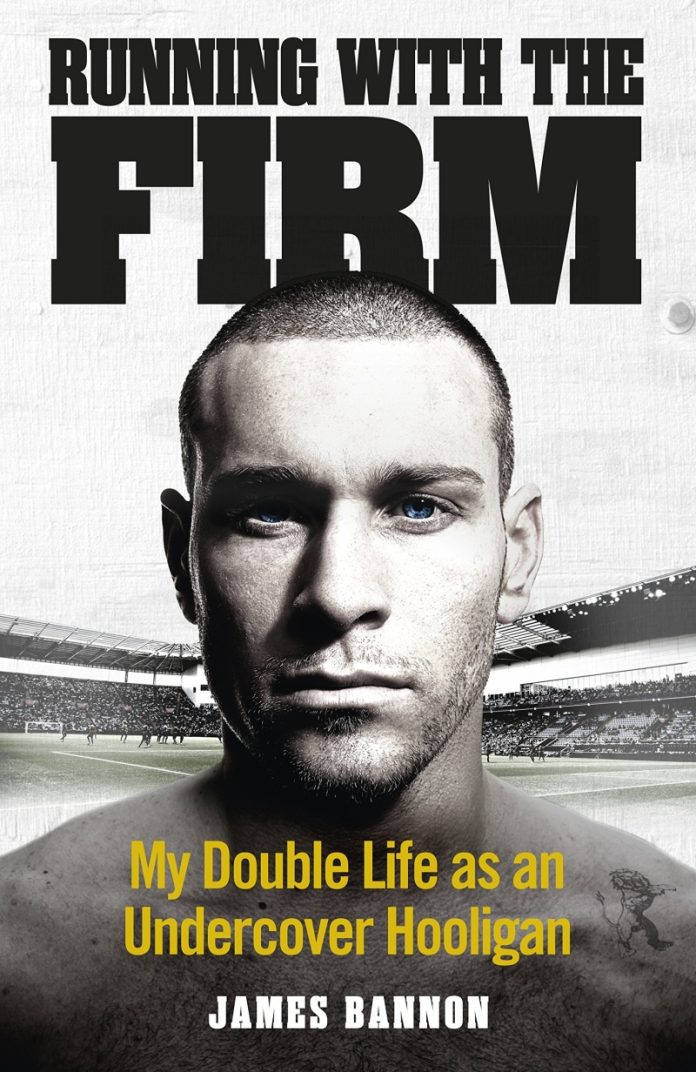 Football violence has largely declined from our national sport, yes it still exists but not to the same extent as it was from the 1970s to the 2000s. In the 1980s football violence was rife and a really big problem, growing up in the 1980s near West Ham’s Upton Park stadium I witnessed first-hand what it was like. It got so bad that police forces starting to infiltrate the gangs and place undercover officers into them to bring down the gangs and their “generals”. One such officer was James Bannon and Running with the Firm is his account of being an undercover football hooligan.

In 1995 a film called I.D. was released telling the story of football hooligans, but it was so shocking and violent that no one was sure if it was fact or fiction. James Bannon, the man behind the film, has written his account of the true events surrounding his life as an undercover football hooligan.

In the 1980s football hooliganism was rife and Millwall were notorious for its violent gang of supporters “The Bushwackers”. The government and police started to crackdown and decided to infiltrate the gangs if they could and bring them down from the inside. A young, ambitious probationer policeman, James Bannon, was selected for undercover duty with the brief to get in with the gang and find the “generals” behind the football violence.

James Bannon had just entered into a very dangerous world of football violence, a world where newcomers were not welcomed lightly. Running with the Firm is his true account of how he painstaking got involved with the gang, carefully and eventually working his way up the ladder to meet the top boys and become one of them.

Bannon’s story tells of his intense and dangerous involvement with The Bushwackers, where the violence was more important than the football at times. The further he got in with the gang the more he was starting to enjoy his undercover job a little too much in his hunt for evidence to bring down the gang. He was making friends with the violent hooligans. Whilst outside of football they may have been decent people, on match days they completely changed; the need for extreme and unnecessary violence against rival teams and their gangs took over, making Millwall one of the most feared football gangs in English football history – a reputation some of them still “enjoy” today.

The book also details how police undercover operations into football hooliganism and its gangs up and down the country actually contributed to the problem and made the violence worse. At times causing the violence with their over the top, heavy-handed tactics or by allowing the violence to happen without intervening.

Overall, Running with The Firm is a well-written insight into a world of violence, showing the devastating impact of football hooligans and their extreme violence. All in the name of sport and supporting your team. Supporting a different team was enough for extreme and brutal violence when the teams played each other – and it didn’t matter if the opposition was your friend, neighbour or a complete stranger. The inabilities, inactions, actions and reactions of the police forces made the trouble worse. The book also shows the effect undercover police work has with the stress on friendships and relationships at home and how living an immersive double-life can take over your life.

Running with The Firm is a disturbing look into the violent lives of the hooligans, the undercover police officer charged with preventing it and the effect it has on the people around them.

Whether or not you have any interest at all in football this book is definitely an interesting read. It is filled with violence, friendships, sadness and some humour.

I would highly recommend it!

Out of the Fire and into the Pan by Shannon O’Leary...