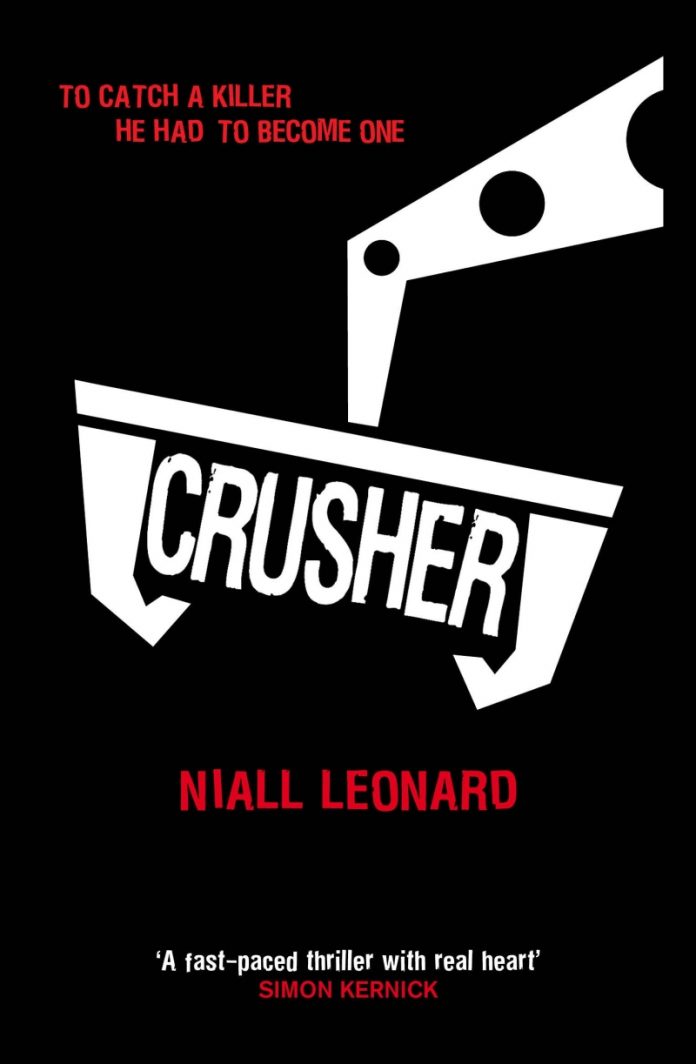 Crusher is the first novel in the Crusher series and the debut novel by Niall Leonard. It is a gritty crime-thriller for the young adult market. Written in one month as a challenge for NaNoWriMo (National Novel Writing Month) I didn’t have much hope for it, but in fact It is a fast-paced thriller that grips you right from the start.

Finn Maguire is a dyslexic 17-year-old with a criminal record, working in a dead-end job flipping burgers, living a dull life. He hasn’t had the best start in life as he has already dropped out of school and been caught dealing drugs. On returning home from work one day, he finds his not-so-successful, out of work actor/screenplay writer father slumped over the table, dead in a pool of blood. His head had been smashed in, brutally bludgeoned to death.

With the police assuming Finn is responsible for the violent and brutal murder he is determined to find out who the real killer is and the reason why someone hated his father enough that they would want to kill him. Prime suspect in the murder, on the hunt to find the real killer to clear his name he is also struggling with the loss of his father and trying to figure out how to cope with all the funeral arrangements and bills, on top on worrying about what is going to happen to him, prison is a real and likely prospect.

To find a killer he ventures into London’s murky underworld which leads him to the biggest, dangerous and untouchable villain in town. To be sure that this is the man he hunting he has to get inside his organisation, but this is a dangerous path leading him into some very dangerous situations. The only way he is going to find and catch the killer he is looking for is to become a killer himself.

Overall, despite my reservations about the timescale it was written in, I found Crusher to be an excellent crime-thriller, it kept me gripped and absorbed in the story from the very first page and very hard to put down. The plot is compelling, and the main character of Finn is excellent; troubled, caring and persistent in his quest.

The story is packed with action and violence, travels along at a fast-past and has plenty of twists and turns to keep you interested and entertained. Some of the scenes can quite violent and brutal, so whilst it is aimed at the young adult market, I would probably say more for the upper end of that age group.

Highly recommended. A very well written debut crime novel by Niall Leonard that leaves you wanting more, and for a novel that was written in just a month it went well beyond my initial expectations. Never judge a book before reading it as you could miss out a truly enjoyable story. I am going to have to read the other books in the series (Incinerator and Shredder), if they are as good as this the series is going to be great.