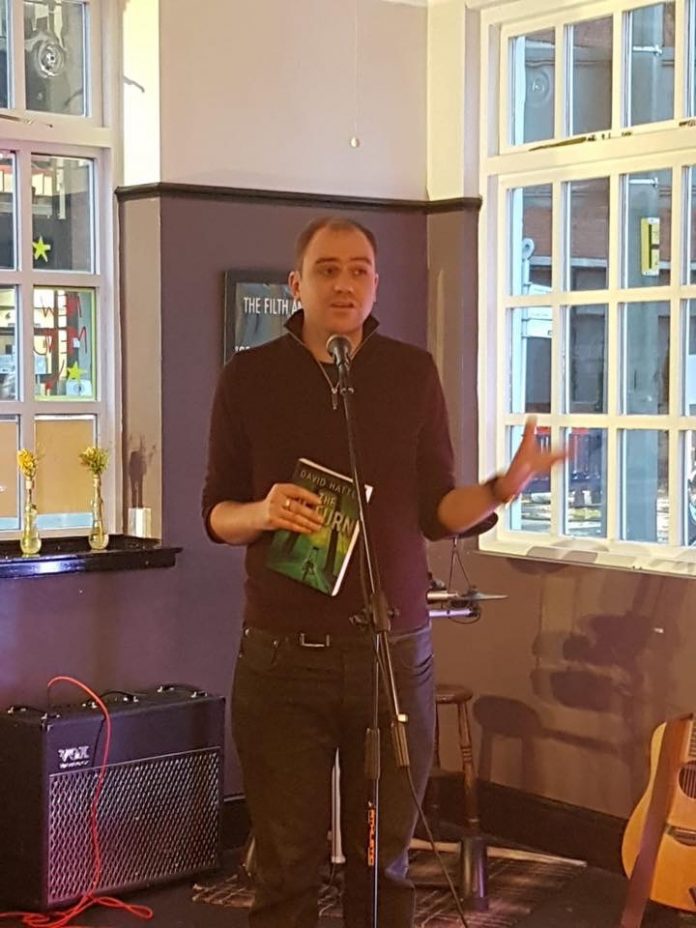 David Hatton published his debut novel, The Return, in 2018 and he has just published his fifth novel: Camp. I have also had the privilege of reading The Catfish and The Exhumation and really enjoyed them – they are all completely different stories from each other, very interesting stories that deal with some quite difficult subjects in a sensitive way.

David was born in Preston, Lancashire and has lived in Leeds, Manchester and even Chicago before finding home in Horwich.

I was able to ask David Hatton some questions to gain a little insight about the author. Here is what was said.

Thank for agreeing to talk to me, taking time out of your busy schedule.

When did you start writing?

When I was in primary school, we were asked to write stories every week and the teacher read out the best ones. She always read mine out and said I should write a book. On my last day of school, I gave her a card and in it I wrote that if I ever published a novel, I would send her a signed copy. I kept that promise twenty years later! I didn’t write after that for a long time until I moved to America and I blogged about my time over there. People fed back about my writing and seemed to be really engaged with it. I started jotting some ideas about but it would be another ten years before I published my first book.

When was your first novel published?

May 2018. I turned 30 and thought I’m going to finally finish that novel and get it out!

Are you a full-time author or do you have another job as well?

In my ‘day job’ I’m a Recruitment Manager for a large retail chain.

How long does it typically take you to write a book and has it been easier or harder during lockdowns?

Usually end-to-end it’s about 6 months and I like a few months off after that to generate ideas and spend some time marketing the book. Lockdown definitely gave me the gift of time. I usually aim for one book a year, but as there was very little else to do this year, I published two this year.

I have just finished reading The Exhumation, why did you decide to write a story based around digging up a dead president?

In 2009, I was living in Chicago and I visited Springfield Illinois where he is buried. There was a sign there describing the true story of an attempted theft of Abraham’s body in 1876. I started to imagine ‘what if someone tried that today?’ I then later heard conspiracy theories about Lincoln and his true intentions for the slaves and the two just seemed to merge together into one story.

All your books have very different themes, where do you get your ideas from?

I constantly have the news on. I also love a good conspiracy theory. I also believe the location is a key part of my book, almost as an extra character so I spend time learning about places which usually inspires some of the story.

The Return was inspired by true attempted claims of life insurance after 9/11 – we don’t know if anyone has successfully attempted it, but so many people disappeared that day it is possible. My mind went to the question of what a family would do if a loved one they presumed was dead came back? It was hard not to be inspired by the famous canoe man too who did just that!

The Medium was inspired by Derren Brown who did a show on psychics. I went and visited a famous psychic medium on her tour too and it was eye opening.

The Catfish was based on a Channel 4 documentary in which they followed predator hunter gangs on their quest to expose people online.

You seem to like two-word titles for your books, is there a reason behind this or do you just like short, to the point titles?

I think it started off with The Return and then The Medium and suddenly it just stuck. My next one is actually a three-word title (in progress)! I’m very orderly and like things to look neat and tidy so when all my books are lined up I can clearly see they’re all mine…. Plus, I like to be to the point and so people know what it’s generally about.

Have you started writing your next book yet?

Yes, just this weekend. I have a jot book of ideas which are all used up now (well the good ones… ‘Celebrity Death Island’ won’t ever see the light of day!) so I’ve had to start a fresh. I won’t reveal too much at the moment in case I get halfway through and delete it because it’s terrible, which I’ve done with another book recently. Hopefully it’ll be out in the summer or autumn next year.

Lynwood Barclay is my absolute favourite. I love novels which are fast paced, great holiday reads and perfect for the poolside. One of the reasons I began writing again was due to my friend, Kerry Wilkinson, who is now an international success selling millions of copies. I’m in awe. I mentioned it to him years ago and he said I should just do it. I know he got to 30 and evaluated his life too, which in turn gave me a kick up the backside to do it myself.

And finally, the hardest question. Do you have a favourite author or book, or do they continually change the more books that you read?

It was Lynwood Barclay’s ‘No Time For Goodbye’ until he released ‘Elevator Pitch’ last year which is by far his greatest work. I can’t wait for his next novel in February.

Click here to read my reviews of David Hatton’s books