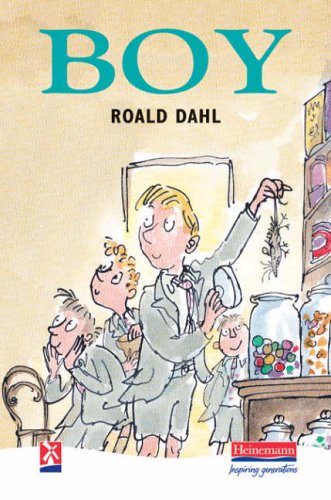 Roald Dahl is one the great storytellers and has to be one of the most well-known children’s book authors in the world, with his books selling in excess of 250 copies worldwide. As well as a children’s novel writer he was also a chocolate bar tester, a short-story writer, poet, screenwriter (did you know that he wrote the screenplay for the James Bond film You Only Live Twice?), a World War II fighter pilot for the RAF, and possibly a spy. 30+ years after his death, his books are still being read and some have even been adapted for television and film. From his wingback armchair, with his HB pencils and yellow legal notebooks he was a prolific writer and had 49 books published (not including screenplays and plays), which included 21 fiction books written for children and 18 short story collections written for adults.

Boy: Tales of Childhood is made up of snippets of Dahl’s most memorable moments from young childhood until he finished school. It is not all fun memories either, it features stories of tragedy such as the death of his sister and father within a few weeks of each other along with stories of growing up in Wales with his Norwegian parents, family holidays in Norway, going to boarding school in Weston-super-Mare in England and the canings that came with it, and having his adenoids removed without anaesthetic (as was the norm in those days).

Overall, Roald Dahl’s Boy: Tales of Childhood is a good and interesting read, giving an insight into Dahl’s life as a child born in Wales, how it shaped his life and influenced his writing and career with books such as Charlie and the Chocolate Factory and funny stories like in the Mouse Plot which was to get revenge on an old and miserable shopkeeper but also featuring some other unpleasant true stories.

Boy is a great insight into the young life of Roald Dahl. It is very well written, as you would expect from Dahl, and is totally absorbing and interesting, as with everything he writes about. It is not a very long book (160 pages) but is great read for Dahl fans of any age, young or old. It is a beautiful insight into the early life of a truly wonderful author and it even has some great illustrations by Quentin Blake to help visualise the events he talks about. I am going to have to read Going Solo to get the bigger story.