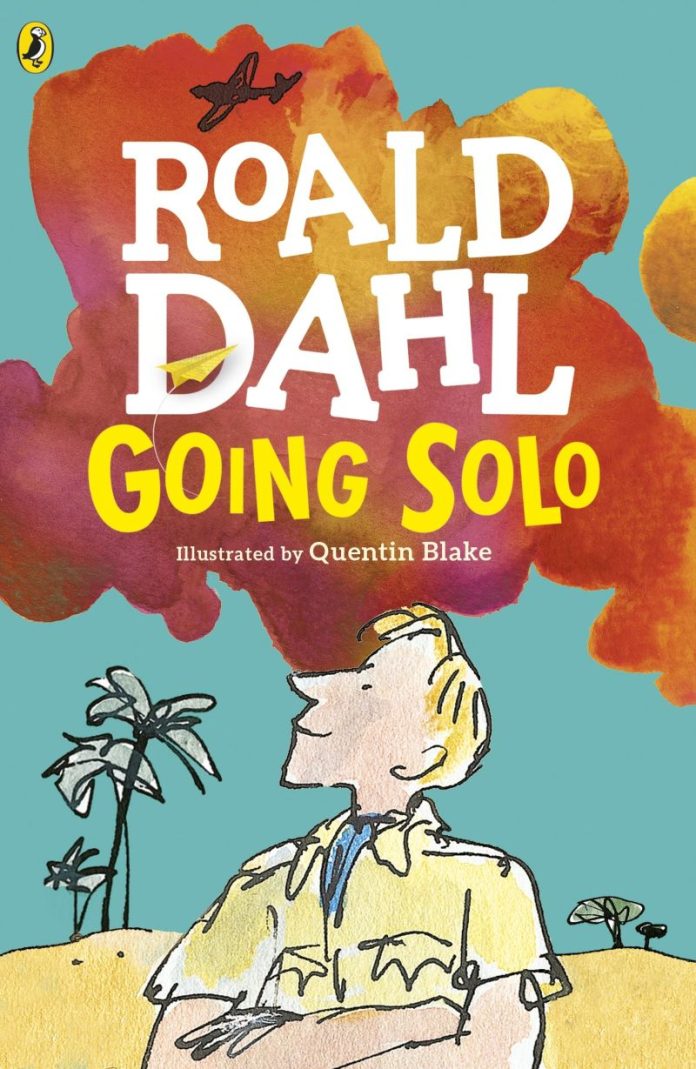 As an author that has sold more than 250 million copies of his books worldwide it is fair to say that Roald Dahl was an extremely successful author whose books were very well received, especially his children’s stories: The Twits, Matilda, Charlie and the Chocolate Factory, and so many more. Not only was he a master storyteller, but he was also a chocolate bar tester, a short-story writer, poet, screenwriter (did you know that he wrote the screenplay for the James Bond film You Only Live Twice?), a World War II fighter pilot for the RAF, and possibly a spy – what a career. He might be best known for his fantastic children’s tales, but he also wrote books for adults and two autobiographies: Boy: Tales of Childhood (published in 1984) and Going Solo (published in 1986, the year he turned 70).

Going Solo is a non-fiction book and part two of Dahl’s autobiography. The first book, Boy: Tales of Childhood, covered his school years and growing up as a child. The second book, Going Solo, continues where Boy left off, and continues his life story from age 22 when he left England for Africa to work for the Shell Oil Company and then on to become a fighter pilot. The book is told in two parts – the first part covers his working for the Shell Oil Company and the second part covers his career in the RAF as a fighter pilot during World War II.

With snake attacks, attacks by lions, capturing German civilians as prisoners of war at the start of WWII, flying Tiger Moth aeroplanes, crashed fighter planes, and air combat this certainly isn’t going to a dry, dull or dreary retelling of part of Dahl’s life. And just like Boy, it’s ALL TRUE and has been illustrated with photographs and original letters.

Overall, this is a fantastic instalment of the Roald Dahl life story, just a pity it didn’t continue with another after being discharged from the RAF.

Going Solo covers Dahl’s journey from England to East Africa and features some very memorable and extremely interesting parts of his life and helps to explain how he became such a brilliant storyteller (surviving a plane crash with head injuries could possibly be a catalyst). He has a very vivid and exquisite way of describing things (for example I loved the description of an unknown naked man running around on the ships deck early in the morning who was described as “the leafless phantom of the sunrise”).

Dahl had such an interesting life before becoming a writer. In fact, his first published work that he received payment for was an eyewitness account of a lion attack whilst he was in Africa.

This book covers just a small number of years of his life after leaving school, from his time working for an oil company which led to him being part of an army unit that captured German prisoners in Africa to his exploits in the RAF from training to crashing his plane with months in hospital to repair his injuries to air-to-air combat with the German Luftwaffe Messerschmitt’s in Africa, the Middle East and Greece.

Going Solo is a highly engaging, entertaining and enthralling read and well-written account of Dahl’s time in Africa and the RAF, and his real-life adventures are just as good as any fictional story he could have made up.

A great glimpse into the life of a man that helped shape him to become a storyteller the world loved and still enjoys today.