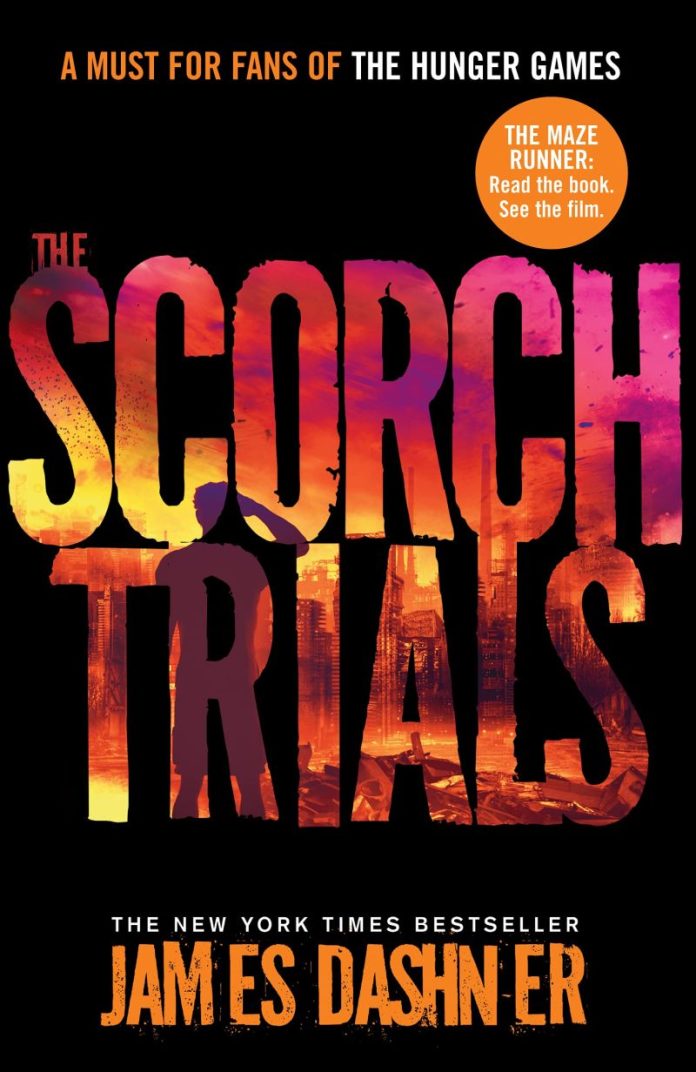 James Dashner’s The Maze Runner is an excellent dystopian sci-fi novel, perfectly suited for the young adult (YA) readership although adults will enjoy it as well. Whilst it is an excellent story of how a group of boys must work together to figure out and escape a massive maze the story never reached a conclusion once the children where rescued. So on to book number two in the trilogy – The Scorch Trials.

20 children of varying ages; Thomas, Teresa, Newt, Minho and the rest of the surviving Gladers have escaped the Maze, their forced imprisonment and the Grievers with their blubbering bodies and metal arms and spikes, into the relative safety of adults, albeit in a desolated world. Thomas and his friends have escaped their nightmare and are now safe, ready to start a new life. That is until after just one night in safety, a disease ridden dribbling man appears at their dormitory window demanding that they kill him! This is the start of a whole new set of problems and trials. The Maze was just phase one, the Gladers now have to embark on phase two – The Scorch Trials. WICKED is not finished with them yet!

Thomas and the rest of the Gladers have entered a world not of safety but one of a disease ridden barren wasteland. Sun flares have scorched the Earth, countries and governments are in tatters and Cranks, people driven to murderous insanity by the infectious disease known as the Flare, roam the crumbling cities hunting for their next victim … and meal.

The Gladers now have more trials and tests to complete, they have two weeks to cross the Scorch, the most burned-out, damaged section of the Earth that is blisteringly hot with some strange and dangerous weather patterns, where the murderous and insane Cranks roam freely. WICKED are continuing to run experiments with groups of kids to see who could survive and help save the world. As with all things WICKED, the odds are stacked against them to put them to the ultimate tests. But there is another group whose survival depends on the death of Thomas and his friends and both groups will do whatever it takes to survive. As will WICKED who will intervene when things don’t go to plan. Friendships will be tested, and new ones formed. Loyalties will be broken. All bets are off. How many will survive The Scorch Trials?

Overall, The Maze Runner was excellent, and The Scorch Trials is just as good. Continuing from where The Maze Runner ended, the story is filled with plenty of heart-pounding action and some brand new characters that keeps it interesting and thrilling.

The Scorch Trials delves a bit more into the history of WICKED and you slowly are drip-fed more information as to how and why Thomas and his friends are being put through these series of tests although a lot is still left in the shadows.

A new group of characters is also introduced into the story, giving it more depth – a group of girls (Group B) who also survived their own maze and the Cranks who are in varying stages of disease and madness.

Whilst it is full of action, violence and death – an all-out battle for survival against varying enemies and situations, it is also steeped in mystery. Who are WICKED? What is their purpose? Why is Thomas so important to them? What will the trials gain? As you race through the excitement of the story, more clues as revealed to help you get an insight into some of these questions – enough to keep you interested and intrigued without revealing the complete answers which hopefully will all be explained in book three – The Death Cure.

The Scorch Trials is a well-written action-packed dystopian thrill ride of a story with some excellent interesting characters and some unique and innovative ways to kill people that makes great reading.