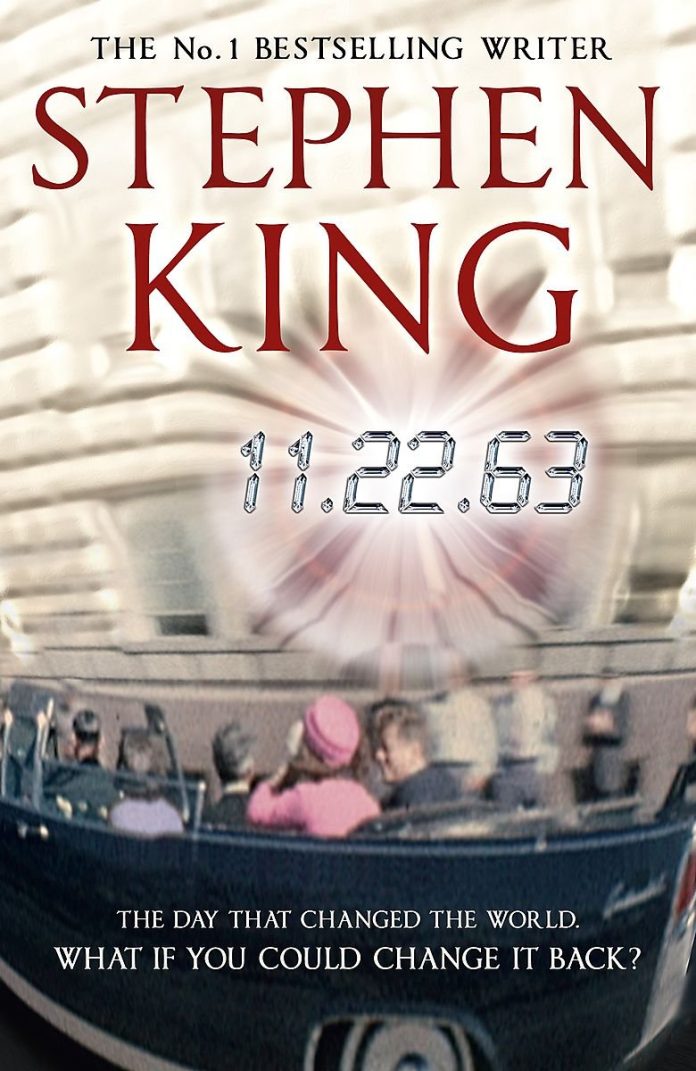 If you could travel back in time and change the course of world history, where would you go to and what would YOU do? Would the potential changes in history be worth it? These are tough questions.

But ask people a simpler question about what they were doing on a certain date and most people won’t have a clue. Ask people over 70 years old what they were doing on 22 November 1963, and I would imagine quite a few will be able to tell you exactly where they were and what they were doing. Why? If you know your history then you will know that it was the day that changed the world – John F. Kennedy (JFK), the 35th president of the United States of America, was assassinated by Lee Harvey Oswald in Dallas, Texas.

In 11.22.63, Stephen King, the master of the horror story, takes us back in time in a time-travelling thriller where the protagonist tries to stop the assassination of JFK. Whilst Stephen King is best known for his horror, 11.22.63 goes in a different direction and is probably one of his best stories ever!

Jake Epping is the protagonist of the story. He is a high school English teacher from Lisbon Falls, Maine, USA who also teaches in an adult education programme to make some extra money. Whilst reading essays from one of his students he reads about a shocking murder.

Later, he receives a call from his friend Al to come and see him straightaway. Al is the local diner owner, a popular place as he sells his burgers at prices closer to the 1950s than 2011.

When he arrives, he discovers that despite it being such a popular eatery it is now closed for good even though it was open just the day before with no mention of closing. Upon entering, he finds a dying man, a much older version of his friend Al – he has aged an awful lot since the day before. Al explains that it is indeed his friend and that he is dying. He then lets him in on a big secret – he can time travel and has been for a long time. He takes Jake into his pantry where he can step back into time to 1958 America. He soon learns that he can stay as long as he wants in 1958 (days, weeks, months or years) and when he returns only 2 minutes have passed, but the downside is that he will have aged the amount of time he stayed in the other past.

Al is dying and he asks Jake for a favour. Al wants him to use the pantry to go back in time to 1958 and and stop Lee Harvey Oswald from assassinating John F. Kennedy in 1963. If the assassination can be stopped, he hopes it will change world events for the better. It sounds insane and Jake decides he wants a trial run first to see if his friend is correct and not just lost his mind. He travels back in time to see if he can stop a terrible tragedy from happening and if so how the change would affect the future. Upon his return he finds that he was successful, and that the future changed so he then decides to go back and stop Oswald. Once he steps back into 1958, he leaves behind a world of mobile phones and iPods and enters a world of Elvis, big American cars, the Lindy Hop and of course JFK. He has to wait 5 years before he can try and stop the assassination so integrates into society, gambles to make money (as he already knows the results) and even falls in love.

Overall, I think that 11.22.63 has to be one of the best, if not the best, Stephen King novels I have read. Although I love his horror novels, this is a big departure and makes for a brilliant story by mixing a real event with fiction.

This is an excellent well-written novel that has been very well researched to keep a lot of it factual and entertaining. It shows the differences of living in 50’s and 60’s America to living in a more modern world of 2011. Whilst it is a time-travelling thriller it also shows how difficult time-travel would be when going from back to a past era with regards to having the right money and clothes, people’s attitudes and even the difference in the taste of food.

I thought it was an excellent story, albeit a long one with my hardback version being 740 pages. I found it very hard to put down as it is very entertaining and thrilling. For fans of Stephen King’s books, it even contains references from one of his previous novels – IT.

A wonderful story of sadness, horror, love, fun and excitement that really does make you think – if you could go back and change one thing what would it be and how would it change the world we live in today? And would it be worth it?

The Botanist by M.W. Craven Review