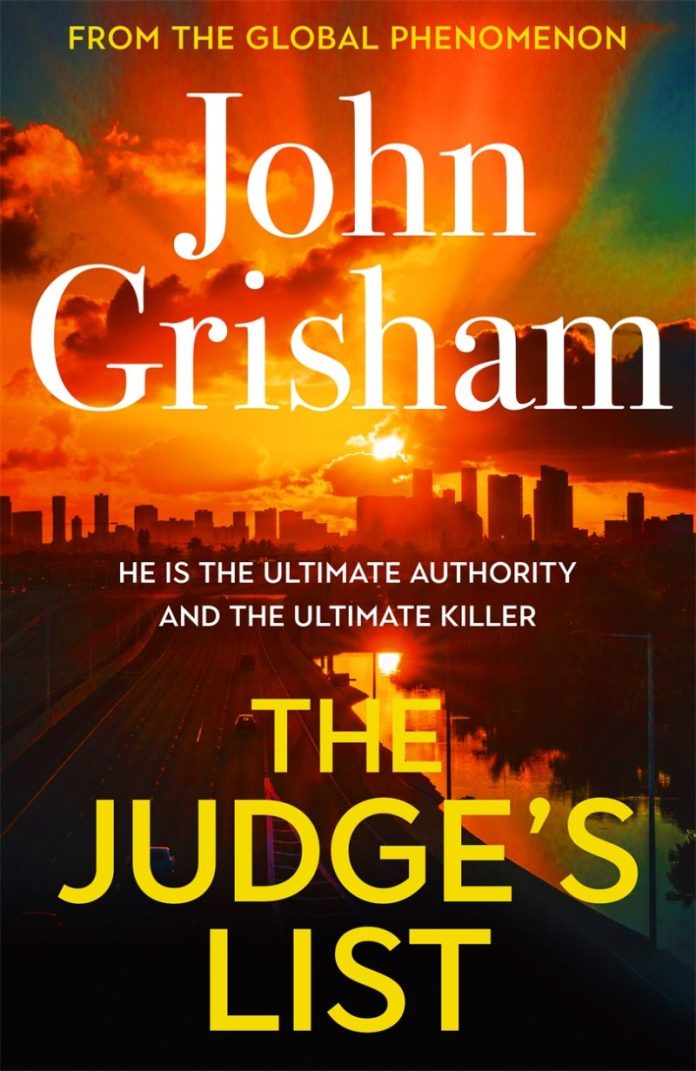 I love reading legal thrillers by the very accomplished John Grisham as they are always interesting and exciting, stories involving lawyers trying to prove that their clients are indeed guilty – or possibly even innocent! But in The Judge’s List we step outside of the courtroom drama to investigate corrupt judges!

The Judge’s List is the sequel to The Whistler (which I haven’t read yet) which introduced the reader to Lacy Stoltz, an investigator for the Florida Board on Judicial Conduct. She is back again for a very different, difficult and dangerous case. Despite it being a sequel, it can be read as a standalone novel and whilst not having read The Whistler myself it didn’t ruin the enjoyment of the story.

Lacy Stoltz is an investigator for the Florida Board on Judicial Conduct and spends her days investigating complaints against judges within the legal system. From minor complaints to accusations of corruption and backhanders, her days are pretty straightforward. That all changes when a mysterious new client appears with a complaint against a serving judge, a complaint that involves murder – and serial murder at that, spanning decades!

When Jeri Crosby (who goes by several aliases throughout the book) approaches Lacy with an unbelievable tale regarding a sitting judge with an unblemished record who she suspects of being a serial killer, Lacy has to investigate the complaint. A judge that has been a successful lawyer and a sitting judge for 10 years being a serial killer with no links to any evidence to any of his crimes is unthinkable and extremely different from the cases Lacy generally investigates.

20 years previously Jeri’s father was a victim of the judge, and she has dedicated her life to tracking, linking and trying to provide enough evidence for an investigation to see him brought to justice – finding more victims along the way. Now the question is, will she be able to see justice done and see an extremely clever serial murderer prosecuted or will her name end up on the judge’s list, one where he delivers the ultimate judgement?

Overall, John Grisham’s The Judge’s List is an excellent story and one with a different take on a serial killer roaming the country. Rather than a psycho going around killing people in gruesome ways, The Judge’s List is played out over a 20 year period by a very patient and intelligent serial killer that leaves no clues behind, hunted by a very determined woman that has slowly built up a picture of his crimes but is scared to bring them out into the open. This book isn’t a legal drama where you would except a judge to meter out punishments for crimes committed and a jury has found the accused guilty of, but one where the judge becomes judge, jury and executioner handing down a death sentence to those he sees that has wronged him during his life.

The Judge’s List is an excellent thriller that just absorbs you into the story, a story where you don’t even have to work out who the killer is as it is announced quite early on within the gripping pages. It is a story that has been well-crafted, not only with a well thought-out tale but with some excellent characters. When the people tasked with upholding the law at the highest level are delivering their own kind of justice, can justice be found?

Jeri, is an excellent complainant if not slightly neurotic. Lacy is brilliant as the tired investigator looking to change her job now tasked with investigating serial murder – something far beyond her usual line of work, and the judge is perfect as the well-respected member of society – an antagonist that quietly goes about his business undetected.

This is a story that has a great plot and characters that drives the story forward at a good pace, one that keeps you absorbed and hooked into the pages. A really engaging nail-biting story that Grisham fans will absolutely love – pure page-turning escapism.

The Judge’s List is an excellent cat-and-mouse legal thriller that really delivers a good story, one with a different type of serial killer and one that requires a different type of investigator to catch him. It is pure escapism, allowing the reader to forgive some parts that are not quite believable in an otherwise well-executed story.

The Judge’s List is an easy thrilling read that you will find very hard to put down.

Gallery of the Dead by Chris Carter Review