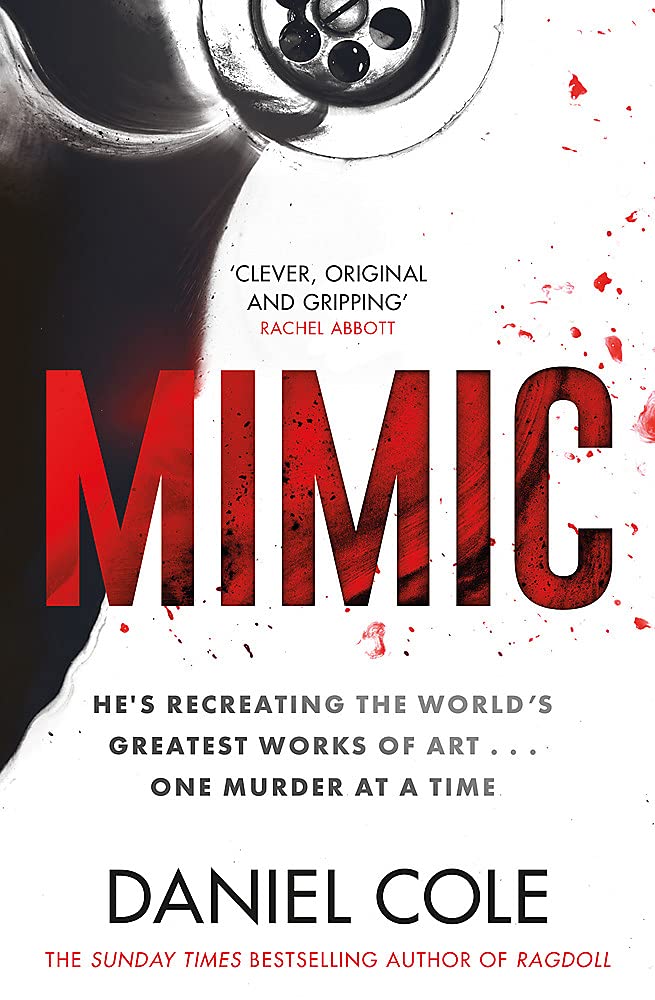 I love reading crime and police procedural novels but sometimes I need a change as occasionally they can all start to blend into one (especially when I am not in the reading mood). When I received Mimic (published August 2021), the dark and twisted thrilling hunt for a serial killer, by Daniel Cole I had no such dilemma and couldn’t wait to start reading it – I absolutely loved his heart-pounding Ragdoll series with its strong characters and gruesome murders – a series where a serial killer commits some very interesting, intriguing and inventive original murders.

Mimic is the 4th book by Daniel Cole, not part of the Ragdoll series but a standalone novel.

In 1989, on a freezing cold night in February, DS Benjamin Chambers and PC Adam Winter are called out to a body found in Hyde Park, London, the body of a man that at first glance looks to have frozen to death. This body is on a plinth, posed in the statuesque form of The Thinker by Auguste Rodin. It soon becomes apparent that this is a case of murder rather than accidental death or suicide. When called to a second odd murder scene where the two victims are recreated in another work of art, Michelangelo’s Pieta, Chambers is convinced that the two cases are linked and the work of a serial killer who is recreating some of the world’s greatest works of art in extreme ways.

When Chambers nearly loses his life to the killer, the killer seems to disappear, laying dormant for seven years until Trainee Detective Jordan Marshall starts with her own investigation into the cold case murders. This awakens a sleeping predator.

In 1996, Detective Marshall pursues Chambers and Winter to reopen the cases. This fresh interest in the cases brings the killer to the fore once again and more murders start to occur, creating a museum piece collection of murders by a killer that is very dangerous and extremely intelligent. The trio of detectives find themselves treading a fine line between catching a deadly killer, delivering justice and becoming vigilantes in their pursuit of a monster far more dangerous and intelligent than any of them had anticipated …

Overall, Mimic is an excellent read. Dark, engaging and extremely entertaining, featuring a serial killer that is very twisted with some very different and some very bizarre but unique murder scenes. It is a story about an aficionado of classic art who takes his appreciation of art and sculpture to a whole new, and very deadly, level.

The story is very written, split into two parts with short chapters that lends itself to finding it hard to put down (I’ll just read one more chapter turns into several very quickly), the pace of the story is just right. Whilst it features bizarre macabre murders in ways that give it an edge over novels featuring serial killers, the murders are not gratuitously graphic or quite as brutal or gruesome as the murders in the Ragdoll series. Like the Ragdoll series, it still features a serial killer that has a very unique, and very interesting, way of killing his victims – no quick bullet to the head or stabbed through the heart here, the murders are much more extravagant, much more interesting and exciting reading.

The characters are all excellent. They are not the perfect all-action detective trio, much more real with the mistakes they make and their “unprofessional” approach to solving the murders. Each character is different, bringing their own realness, gruffness and clumsy humour to the story.

I found this to be a very exciting and enjoyable tale of murder that is quite unique and different with a strong storyline and strong, likeable characters. Daniel Cole has a very unique talent, creating dark and interesting, with some dark comedic and sarcastic humour to lighten the load, stories and Mimic is another excellent read that isn’t mimicking other novels of this genre.

Daniel Cole’s Mimic is an easy, but chilling and exciting, read that draws you in and gets you hooked. The short but well-written chapters make it a fast novel to get through.