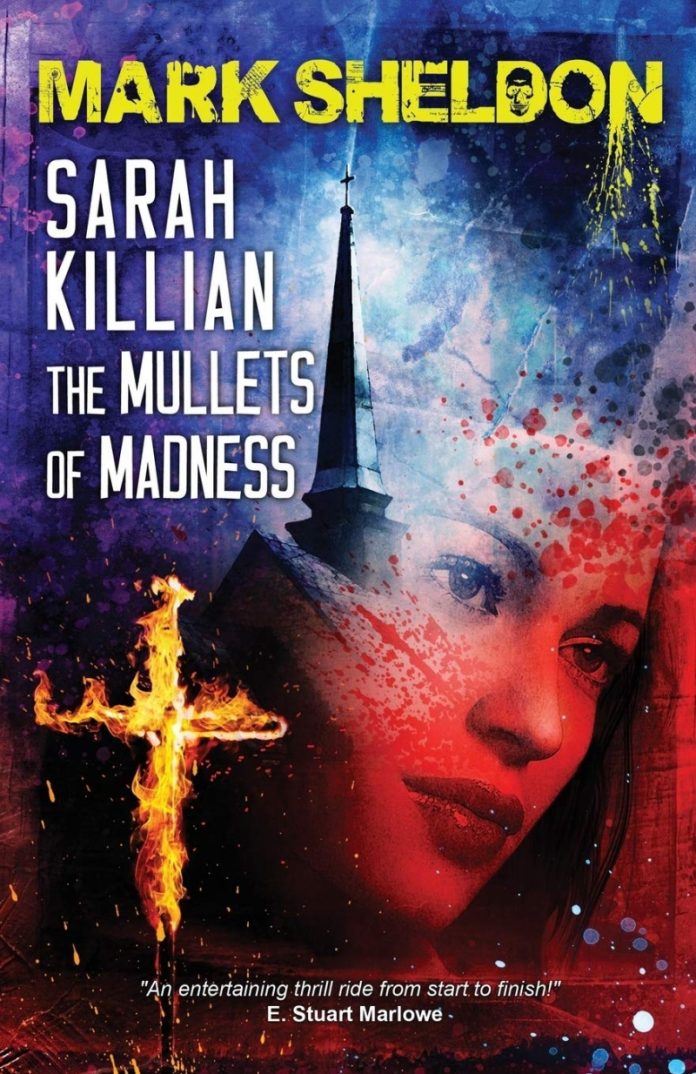 Who doesn’t love reading about serial killers? I know I do. For the most part they are fairly similar, but Mark Sheldon has created a foul-mouthed, stuffed toy mutilator, socially inept serial killer for hire with Tourette’s that breaks the mould.

In the first book of this series, Sarah Killian: Serial Killer (For Hire!), we were introduced to the character of Sarah Killian (AKA Sick), a 30 years old professional serial killer (PSK for those not in the know). She works for an ultra-secret organisation known as T.H.E.M (Trusted Hierarchy of Everyday Murderers) who offer murder services in the form of assassins and serial killers. She now kills for profit (and to satisfy her killing urges without the fear of being caught as the government are the biggest clients). Now she is back for a second outing in The Mullets of Madness after having escaped the grasp of rogue ex-T.H.E.M agent Nick Jin.

Sarah works alone, but after the fiasco with Nick Jin all agents must be paired up (especially Sarah) and this time around Sarah is paired with Mary Sue Keller again (torture for Sarah, but they work well together). If you have read the first book you will already know that Mary Sue is an overly perky, happy and extremely talkative assassin.

After Sarah and Mary Sue are given an easy job (to satisfy Sarah’s murderous craving), it doesn’t go as planned and ends with an ominous warning. It soon becomes clear that Sarah’s nemesis Nick Jin is still at large and coming for Sarah.

Sarah and Mary Sue are soon despatched to Tennessee for a job that has two parts: firstly, to discreetly kill off a family accused of being KKK (Ku Klux Klan, white supremacists) organisers and secondly, to flush out Nick Jin who always seems to be one or two steps ahead of T.H.E.M and Sarah. One thing is guaranteed, blood will be spilled especially when guests in the hotel that Sarah and Mary Sue are staying in start to be murdered.

Overall, Sarah Killian: The Mullets of Madness is a brilliant book (for me it was not as good as the first book, but still brilliant). Sarah is still gruff, sarcastic, mean-spirited, unpredictable and murderous (and still killing her stuffed toys) but this case is making her a bit more emotional (as least in the form of her role of Nanetta, Sarah could never do such a thing) adding an extra dimension to an already great character.

The characters are well-crafted and work very well together even though they are entirely different, playing off each other’s strengths and weaknesses.

The story is told from Sarah’s perspective with her narrative and is a story that features murder, horror, suspense and espionage. With a perfect blend of murderous intent, graphic killings and dark humour it is a quick and enjoyable read, I was sorry to reach the end so in the words of Sarah, “Captain Hammer’s nipples!”

Sarah Killian: The Mullets of Madness is a fun and unique story that will have you laughing whilst rooting for a serial killer!