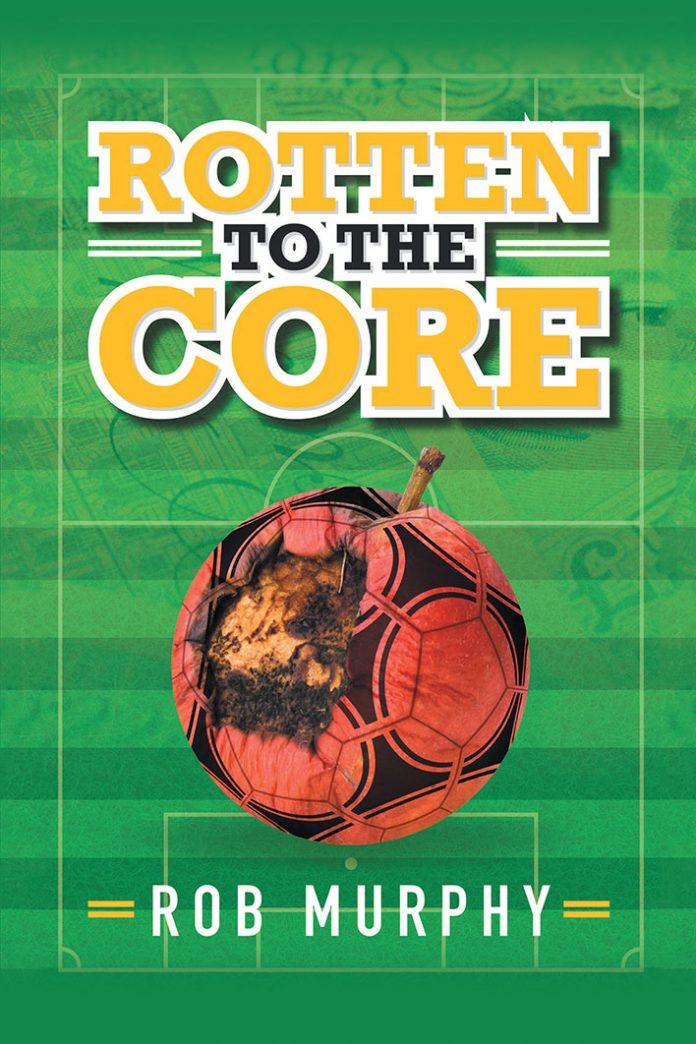 I read lots of crime thrillers (I love them) and there on lots to choose from, so when I was asked to read Rotten to the Core by Rob Murphy I was intrigued as it is a book at first glance about the serious business of football (soccer), but turns out it is more of a political crime thriller based around football governing bodies and the lack of transparency behind them.

In 2009, Russia and England are bidding to stage the FIFA World Cup, a football tournament that both countries are desperate to host. François Picard is Secretary-General of Federation International de Football Association, otherwise known as FIFA, and he has been offered millions if he can influence the bidding process and secure Russia winning the bid to host the World Cup 2018.

As England’s bid is very strong, Picard comes up with a plan to undermine their bid that involves Russian money, manipulation and the UEFA European Championships. When the small countries of Scotland and Wales put in a joint bid to host Euro 2016, a bid considered to be a no-hoper, Picard gets to work to bring the tournament to them at the expense of hosting it in his own country, France. The aim is that Scotland and Wales will just not have the resources to host such a competition, have to drop out (leaving France in a strong position to take over) and therefore sabotaging England’s bid for the World Cup.

With millions of Euros on the line, Picard is playing for high stakes and every decision turns into a matter of life and death.

Overall, Rotten to the Core is a very good thriller. It has been based on true facts of corruption in world football and its governing bodies, whilst being a complete work of fiction. It blends in UK and world politics, taking lots of liberties with the truth but making it a rather interesting story.

It is not a book about football, football teams, football players or their swanky lifestyles but a very good political thriller around politics, money, greed, bribery, corruption, self-interest, backhanders, corporate espionage and murder with a bit of football thrown it.

Rob Murphy has created an intriguing story about corruption on a very large scale in the world’s biggest and richest sport, world football (which led to the real resignations of football’s most powerful leaders and criminal investigations launched). Blending in the politics of the UK at time he has created a fictional story that is fascinating and entertaining (even if some parts do stretch the imagination).

The characters, of which there are many, have been well thought-out and the story has been plotted and researched very well, blending different, unrelated events to fit in to the authors narrative extremely well.

Rob Murphy’s Rotten to the Core is an enjoyable read that delves into the murky world of football and politics, blending the two into a riveting story. Whilst it is based on true facts of corruption in football, combing it with world politics and the lengths people will go to further their own needs, whether financially or politically orientated, it is good story. But if you are not a football fan, don’t let the subject put you off as there is very little football.

My only small niggle with the book was with the naming of some characters, I thought some could have been named better, especially the character name of Hans Graber, for me anyway, it was just a bit farcical (I don’t know if it was done intentionally to add in a small amount of humour, but for me it didn’t work). But that is just a very small issue in an otherwise good book.

Rotten to the Core is a political thriller that will captivate the reader, drawing them into a fictional story that could just very well be real. A very entertaining story.

For more information about Rob Murphy and his books, visit www.robmurphyauthor.com.