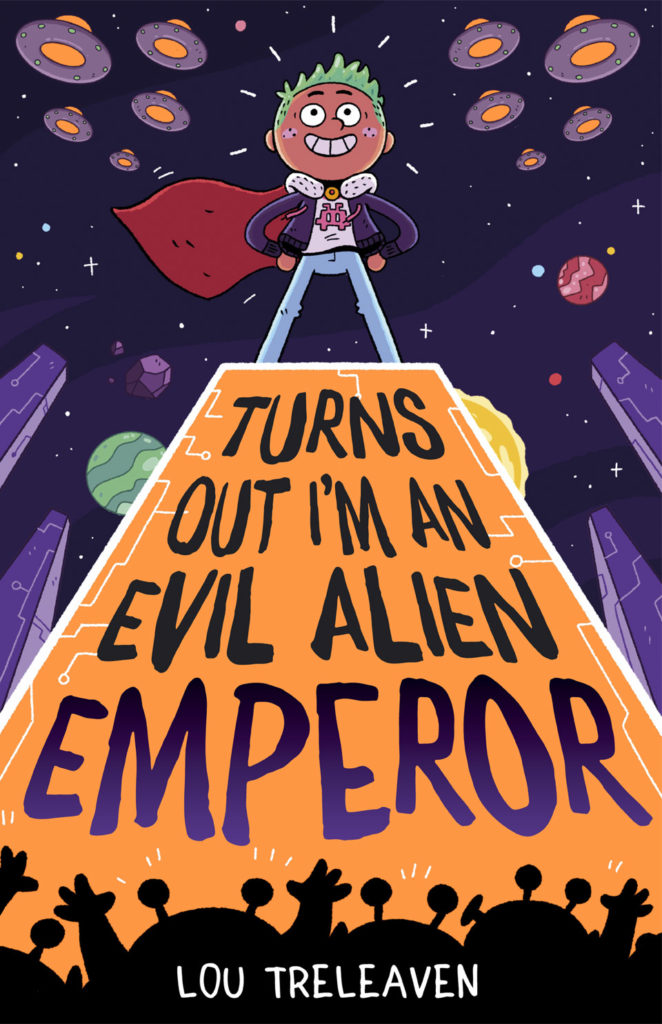 Back in July we read the first book in the Turns Out series, Turns Out I’m An Alien by Lou Treleaven, where 11 years old Jasper found out that he is actually an alien from the planet Gloop and that his real parents are slugs! This month (August 2020), the second instalment in the series has been published, Turns Out I’m An Evil Alien Emperor, and we were delighted to catch up on the adventures of Jasper and his sister Holly a month after saving the Earth from an alien invasion. If Jasper being the ruler of a planet full of green slime and slugs for parents wasn’t weird enough, things are about to get even weirder.

For the past month Jasper has been coming to terms with the fact that he is an alien with slugs for parents. He is settling into life knowing that he is an alien and can change into a giant slug – just not at will and has trouble changing back. His foster parents, Bill and Mary, are about to adopt him and his foster sister Holly, the Alien B&B is going well although it can be a bit hectic and Holly is still obsessed with teenage pop sensation Harry Handsome. His family life is just as normal as it can be. That is until Holly drags him to a Harry Handsome concert (who we already know Jasper detests for various reasons) and a new intergalactic adventure begins. The narcissistic pop star is brainwashing the entire planet… but for what purpose? And is the supermarket Asbi going to play a part again?

It is a well-written, fun and entertaining story that children will be able to relate to with the turmoil of growing up; Jasper is not only dealing with the being adopted by his loving foster parents but is also dealing with hormones and uncontrollable changes in his body, along with feeling different (and the pressures of going to school, ruling a planet and saving the world).

It is jam-packed with lots of different alien encounters, from the nice and cute balls of fluff that can really pack a bite, the spindly spider receptionist and of course Harry Handsome and his evil emperor.

The story travels along at a fast pace and is action all the way, there is never a dull moment so younger readers will not lose interest in the story. At 260 pages it is a fairly long book but it is split into easy to read chapters with simple text (apart from some alien names).

A really good slimy adventure story that will enthral the reader with its likeable characters, good and evil, its humour and the fast pace of the story.

The Turns Out series is aimed at children aged between 9 and 12 years old and is a space adventure story packed with intrigue and madcap adventures.

Lou Treleaven is a very talented author of books for children, whether that is picture books for the youngsters or longer, chapter junior fiction titles.

If You Were Me and Lived in… Colonial America Review