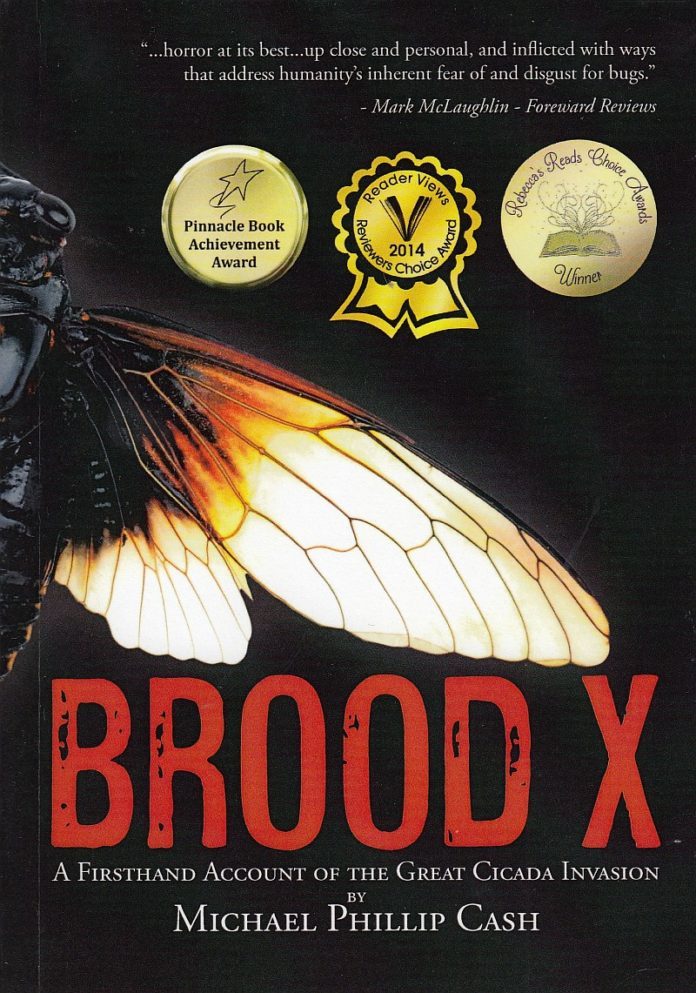 Brood X is the first horror novel written by Michael Phillip Cash. It is a story about the Great Cicada Invasion on Long Island and the North-eastern United States.

Seth is unemployed and doesn’t seem too bothered about finding a job. His schoolteacher wife, Lara, has just announced that she is pregnant with the baby due in the Summer. As Seth has just bought himself a brand new digital camcorder he plans to document the entire pregnancy using it.

While watching the television news one night, a news report announces that during the summer a swarm of cicada (known as Brood Ten), which are similar to locust, will emerge in their billions and swamp the North-eastern United States, including Long Island where Seth and Lara live. Brood Ten have been dormant for 20 years so are expected to be bigger and stronger than the average annual swarm.

Seth sees the news reports as media hype, scaring the population as a way to stimulate the poor economy as everybody is out stocking up on food, water, batteries etc… leaving the shops empty. He refuses to buy into it, therefore not buying any extra supplies.

During a hot summer night Brood Ten emerge from the soil and wreak havoc on the community, killing power and phone lines, wi-fi, food and water supplies. This puts the state under the control of the National Guard and no one is allowed to be on the streets. Civilisation as they knew it has gone.

Brood Ten arrive in their billions covering everything and attacking anything that moves, with deadly consequences. No one was prepared for the onslaught that was to arrive that summer!

Seth, Lara and their unborn baby are now in a fight to save their lives.

Overall, before reading this book I thought it was just going to be yet another run-of-the-mill insect attack story, but I was wrong. And having read other novels by Michael Phillip Cash, which I thoroughly enjoyed, this is one of my favourites.

Brood X is fast paced, well-written and has some great characters from the very likeable schoolteacher to the conspiracy theory survivalist. With tension, humour and horror it is an excellent read, I couldn’t put it down and read it in one day (although 300 pages it is in a larger font with quite wide spacing).

As a horror and ghost story writer Michael Phillip Cash is definitely an author I would recommend.

Click here to read my interview with Michael Phillip Cash

The Facebook Killer (Part One) by M.L. Stewart Review