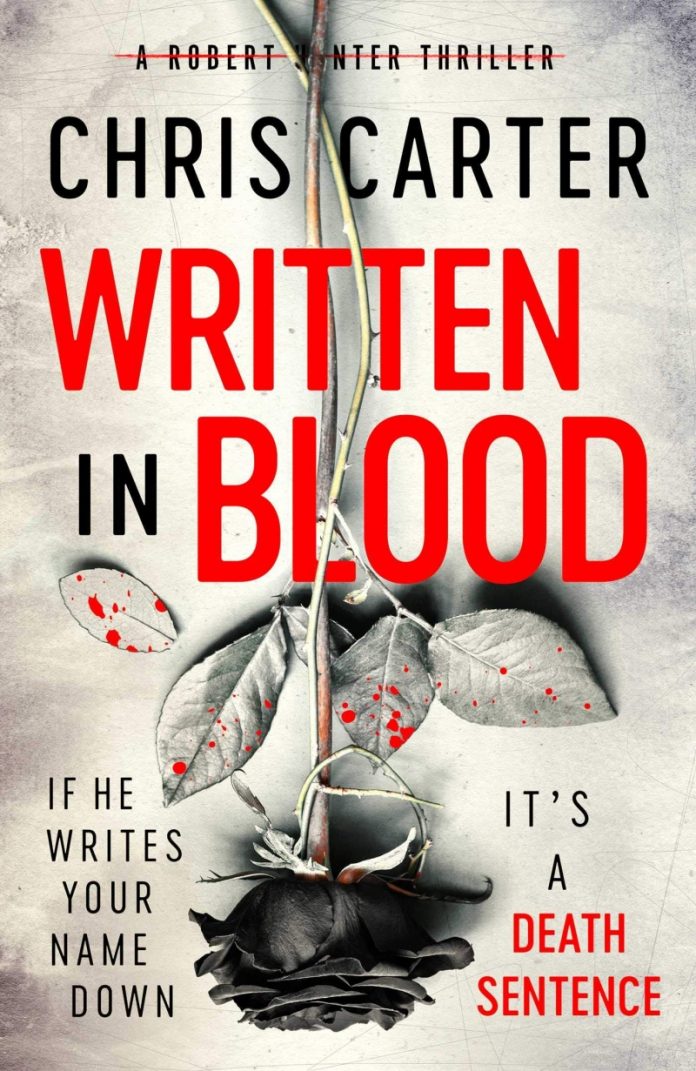 Written in Blood, by Chris Carter, is the eleventh book in the Detective Robert Hunter series.

I have been a big fan of Chris Carter and the Detective Robert Hunter series for a few years now and couldn’t wait for the eleventh book in the series, Written in Blood, to be released – I pre-ordered it for the original release date in May (which just happened to be my birthday, so a perfect birthday present), but the publishing date was pushed back and I received my signed copy in July and it was worth the wait!

Detective Robert Hunter and his partner Detective Carlos Garcia are back for another dangerous investigation for the Ultra Violent Crimes unit of the Los Angeles Police Department. Again they are on the hunt for another serial killer who will stop at nothing.

Angela Wood is a 21-year-old master pickpocket. She operates in LA but only steals what she needs. It is 3 weeks until Christmas and she has taken her haul to a bar to count up and see if she needs to go back out for more when she overhears an overly rude man in the bar. She decides to teach him a lesson by stealing his bag, a bag which turns out to the worst mistake of her life! The bag belongs to a serial killer and contains his most valuable possession, a leather-bound  journal, and he will stop at nothing to get it back.

She delivers the journal, or diary of death, to a forensic agent of the LAPD who passes it on to Detective Robert Hunter, head of the LAPD’s Ultra Violent Crimes Unit, a special section of Robbery-Homicide that only deals with the most violent crimes especially serial killers and high-profile murders. It soon becomes apparent that the information contained in the journal is real and that there is a serial killer on the loose, and one that nobody has even been aware of … until now!

The killer wants his journal back and he will kill Angela and anyone that gets in his way of retrieving his prized possession, including Detective Hunter.

Overall, Chris Carter has written another pulse-pounding read. Written in Blood is a dark and twisted novel, as fans of Chris Carter have come to expect, that is packed with a lot of tension and action. Whilst it is not as gory as previous novels, what there is is shocking, gruesome and bizarre, making a very good story of not only murder but delving into the mind of a serial killer (Chris Carter has a background in psychology and criminal behaviour so uses his experience very well). Putting murder aside, it is also a story of a battle of wills between Hunter, Angela and the killer.

The characters are excellent. Angela is a very likeable character despite her attitude. The killer is everything you expect from an antagonist; evil, dangerous and highly intelligent, and Robert Hunter, as always, is the perfect protagonist; his intellect and tenacity jump off the page.

Written in Blood will leave you holding your breath whilst waiting to find out more. With detailed descriptions of bizarre murders, no two are the same, it is an addictive read and excellent addition to the Robert Hunter series. The only small negative for me was that some things were over-explained with not every comment needing an explanation.

For me, Written in Blood is not his best novel but is a very enjoyable, thrilling and action-packed read with a lot of tension and a killer that certainly gives Hunter a run for his money.

A gripping and intense psychological thriller with a very good plot and great characters that really draw you in.