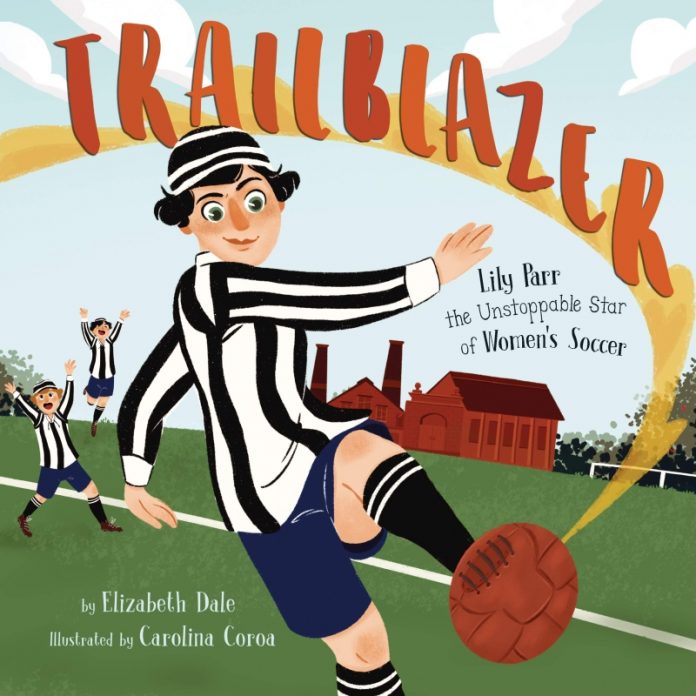 Trailblazer, written by Elizabeth Dale and illustrated by Carolina Coroa, is a non-fiction children’s picture book and is the inspirational true story of Lily Parr, the unstoppable star of women’s football.

Football is the most popular sport in England and extremely popular in countries the world over, with many millions watching every week. Whilst many may wrongly consider football a male sport, the women’s game is starting to come into its own and is really taking off. But women’s football is not a new thing as teams played in the 1700s with the first official women’s match was in 1895. The women’s game became popular during World War I, over 100 years ago, and had a resurgence in the 1960s. And did you know that women’s football is played in at least 176 countries throughout the world?

Trailblazer follows the true story of Lily Parr, one of the countries most successful footballers and, so far, the only women player to have been commemorated with a statue in the National Football Museum in Manchester. It is not just the story of a female footballer, but one of prejudice and ridicule (and that still exists to some degree in professional football with outdated views).

Lily Parr started playing football aged 14 for St. Helens Ladies. She was a 5ft 10” left-footed player who played outside-left (or left winger in today’s game) but could play equally well in any position. She scored 43 goals in her first season (aged 14) with nearly 1000 goals in her 31+ year career.

She played against men and women, beating or drawing against most teams. Lily was exceptionally fit, and her shot was more powerful than her male counterparts, which at one time resulted in breaking a goalkeeper’s arm when he saved one of her penalty kicks.

On Boxing Day 1920, her team drew a record attendance of 53,000 (with another 14,000 stuck outside the stadium), just shows how popular the women’s game was and still is. The women’s England team of today has since broken that record with a staggering attendance of 77,768 at Wembley in 2019.

That is very impressive, but she also had a full-time job, playing football in the evening and on weekends, and she also had to battle male prejudices along the way. And even more impressive is that the women players took low pay so that money raised from the games could be given to charities (generally for injured soldiers) – over £140,000 was raised for charity, and if that seems a lot it is actually several million pounds in today’s money.

In 1921 the English Football Association (FA) banned women from playing on their grounds using lots of petty excuses (some of which unfortunately are still used today). But that didn’t stop Lily and the other ladies, playing on wherever they could, eventually going to America and beating teams from the men’s top division. The ban was eventually lifted 50 years later in 1971!

As good as she and her teams were, they were never really recognised or praised for their achievements; players were banned for 3 months for taking part in the World Cup.

Her perseverance has helped progress the women’s game, seeing the National Women’s League formed in England in 1991, and it is getting stronger all the time (there is still some way to go purely because of prejudice that still exists with outdated views of women having no place in football, they are not built for it, not skilful enough etc.). In fact, in 2019 over 1.12 billion people watched the Women’s World Cup tournament on television.

Overall, Trailblazer is an excellent non-fiction book telling the story of how a footballer battled prejudice to be at the top of her game and inspiring others along the way. It is perfect for football lovers, particularly girls and is packed full of facts about how the women’s game started and progressed. It also has a very subtle message that determination and never giving up will win through, even when faced with prejudice and rejection.

Whilst it is an inspirational book about girls and women playing football, it is more so about fighting prejudice, ridicule and never giving up. But it is not just a book for girls, boys will love it too. Girls and boys will take away a lot from it, they will learn that is it not just a male sport and girls can play too (and are in fact good at it and often beat their male counterparts) but also that football is a game of skill, fitness and teamwork where gender should play no role.

Along with the well-researched facts and easy to read text, Trailblazer has been beautifully illustrated by Carolina Coroa. The fun pictures will really appeal to the reader, they fit very well with the story matching the time period they represent without being dull.

Trailblazer is a very inspirational book telling a brief story of one of the most talented footballers to ever play the game and who did so with passion and panache. A truly remarkable footballer and woman. This book will hopefully inspire lots of girls to play the game whilst at the same help to break down some of the prejudices that still exist and showing that girls can play the same sports as boys, and vice versa.

So whether you already have a budding little footballer in the house or a child that thinks “football is for boys” this is a book they should read.

You can find out more about the history of women’s football at www.thefa.com/womens-girls-football/history.

The Lost Smile: The Fabulous Five by Julia Stebbing Review

As Nice As Pie by Gary Sheppard Review