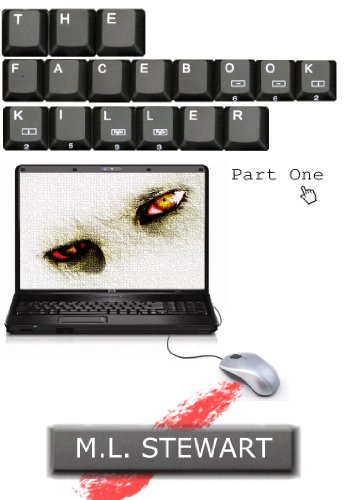 Most people these days have some form of social media. Some use it daily, others not so much, some not at all. After spending some time looking at your “socials”, you may even be reading this review on one, after reading The Facebook Killer by M.L. Stewart you might not look at them in the same way again – that friend request you just accepted; do you know who they are? Could they be a serial killer out for revenge? I guess time will tell.

To take your mind off of worrying about that friend request lets get back to my book review, a tale of revenge and murder in Hannibal Lecter style … using the world’s largest social media site to carry out some brutal crimes. The Facebook Killer is part of a trilogy and this a review of book number one.

Dermott Madison is a mild-mannered, middle-class, workaholic banker. When his daughter turns 18, he misses her birthday party as he is working yet again. After another long day he arrives home to find his house on fire. He rushes into the blazing inferno to try and save his family but is rewarded with half of his face burnt off. The bad news doesn’t end there as his wife and daughter are dead inside. But it gets even worse when it is discovered that his daughter had been raped and murdered before the house was set on fire. The fire was just an attempt to destroy any evidence of the crime that may have been left behind. One man is responsible for the crimes: Abdul Hamid.

Abdul Hamid is soon arrested, charged with rape, double murder and arson and a trial pursues. He should go to prison for a very long time. But due to a technically, his trial at the Old Bailey collapses, leaving him a free man.

Dermott has lost everything. His wife, daughter, home and even his job have all gone. And now the man responsible is free as a bird. His anger and rage result into a downward spiral of obsession to get revenge. Revenge in the most hurtful, damaging and brutal ways. He wants Abdul to suffer just as much as he has suffered. He wants him to lose his friends, lose his family, before ultimately exacting the most extreme revenge on the murderer.

Revenge must be exacted, and Dermott’s revenge plan comes to him in a dream. Abdul takes the form of an apple tree, his friends and family take the form of apples on the tree, making Dermott the apple picker with the police becoming the farmer. The plan is to pick all the apples from the bottom of the tree, working his way up to the top.

Now armed with millions in insurance payments, he sets out on a deadly course to track down the friends and family of Abdul, and the easiest way to do so is to log on the world’s largest social media networking site, Facebook – a stalker’s playground.

Overall, The Facebook Killer (Part One) is an excellent murder thriller told from the prospective of Dermott Madison. It follows his life from a mild-mannered family man, a workaholic banker and his descent in to a dangerous and deadly serial killer, one who is losing his grip on reality by creating extra personas to carry out his revenge.

I really enjoyed the story. This book does feature some detailed descriptions of brutal murders, if you are squeamish this book may not be for you. Some of the murder scenes where electronic gadgets are used and the latex masks that are used to change personas stretch the imagination a bit, but as a work of fiction and pure escapism it does make for a good, interesting and enjoyable read.

As this is part of a trilogy the story does end without a conclusion which can be frustrating haven’t to get the second and third books in the series. Although it can also be purchased as a complete set.

I really enjoyed reading The Facebook Killer. It is only around 150 pages in length so isn’t a long story (although over the three parts it is the size of a decent full novel). It was such an absorbing read that I couldn’t put it down and after finishing I couldn’t wait to start reading the second part. If you like your stories 100% believable and true to life then this is not for you, if you want a read that is pure escapism that has a good well-told story and like a spot of brutal murder and revenge thrown in along the way then I can highly recommend it.

Once you have read it, will you delete you Facebook account? You will certainly think twice about accepting those friend requests. Networking has never been dangerous.