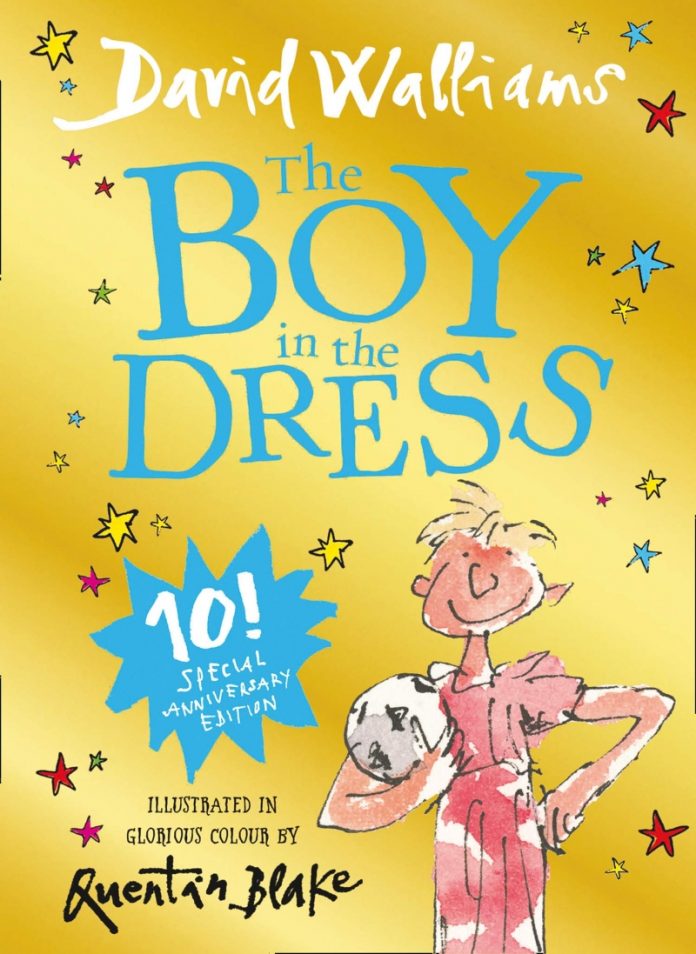 British comedian David Walliams is a multi-talented entertainer. Having watched him on television in shows such as Little Britain, Big School and Britain’s Got Talent many, many times over the years he is clearly very talented. He has also helped to raise millions of pounds for charity by swimming the English Channel, the Strait of Gibraltar and the River Thames and has clearly deserved gaining an OBE.

In 2008, he decided to add another string to his bow and become an author, but maybe not an author of books that you would have expected – he decided to write books for children. He clearly made the correct decision with his books having sold over forty million copies around the world and have been translated into over fifty-five languages.

I have only ever watched the television adaptations of his books and decided it was about time that I actually sat down and read one. The best place to start is always at the beginning, so I started with his debut novel: The Boy in the Dress.

The Boy in the Dress was published in 2008 and is a story of being different, cross dressing and friendships. It has been adapted for a television film and even a stage musical.

Dennis loves to play football; he is very good at it and the best player in the team. He also likes to look at fashion magazines, he loves to look at the dresses. His father is quite emotionless (he misses his wife) and John, Dennis’ older brother, is very laddish so Dennis has no one he can speak to about his love of fashion. That is until he befriends Lisa, the most beautiful girl in the school. With her help he soon comes to realise that it is ok to be different.

Lisa James designs and makes her own dresses. When she suggests that Dennis try on one of her creations, the idea sticks in his head and sounds really rather good. He decides to give it a try and feels liberated. He put his new look to the test at the local shop with Raj, the very jolly shopper, and fools him in to thinking that Dennis is actually Denise. The next step up is to try and fool the entire school, but it doesn’t go as planned – posing as a French exchange student, a female French exchange student at that, was always going to be a challenge.

Overall, this is quite an interesting book and quite different from what I would have expected from David Walliams, it is very interesting with quite a sensitive topic at its heart. Dennis is struggling with who is his and how to deal with it; he is a typical 12-year-old boy that loves to play football, has a crush on the most beautiful girl in school and loves the look, style and feel of wearing a dress. It is funny and, in some places, hilarious. Quentin Blake has illustrated it and the illustrations complement the text perfectly.

David Walliams has written it in a very sensitive way, handling a difficult subject with ease whilst managing to keep the humour in the story and being able to show the prejudice and even acceptance of others.

Whilst this is a very humorous story, it handles the topics of cross dressing, family dynamics and friendships with empathy, keeping the reader engaged and interested in the story. A heart-warming and funny story that handles the sensitive subject matter with feeling and humour.

Whilst Dennis is the main character, there is a supporting cast of some very funny and quirky characters Like Raj the jolly shopkeeper (my favourite character) who would try and sell water to a fish and manage it, Darvesh’s mum whose love for her son is brilliant, and Mr Hawtrey the school headteacher who just HATES children – the villain of the story that is perfect (although I would have liked to see him have a bigger role).

I was very surprised with the quality and content of The Boy in the Dress, it is an unexpectedly charming story with lots of humour that has been written in a sensitive way, and in a way that children will understand and be able to take onboard the messages at the heart of the story – there is nothing wrong with being different, just be yourself in whatever form that takes and accept others for who they are.

A good humorous tale that children will enjoy.

The Lost Smile: The Fabulous Five by Julia Stebbing Review