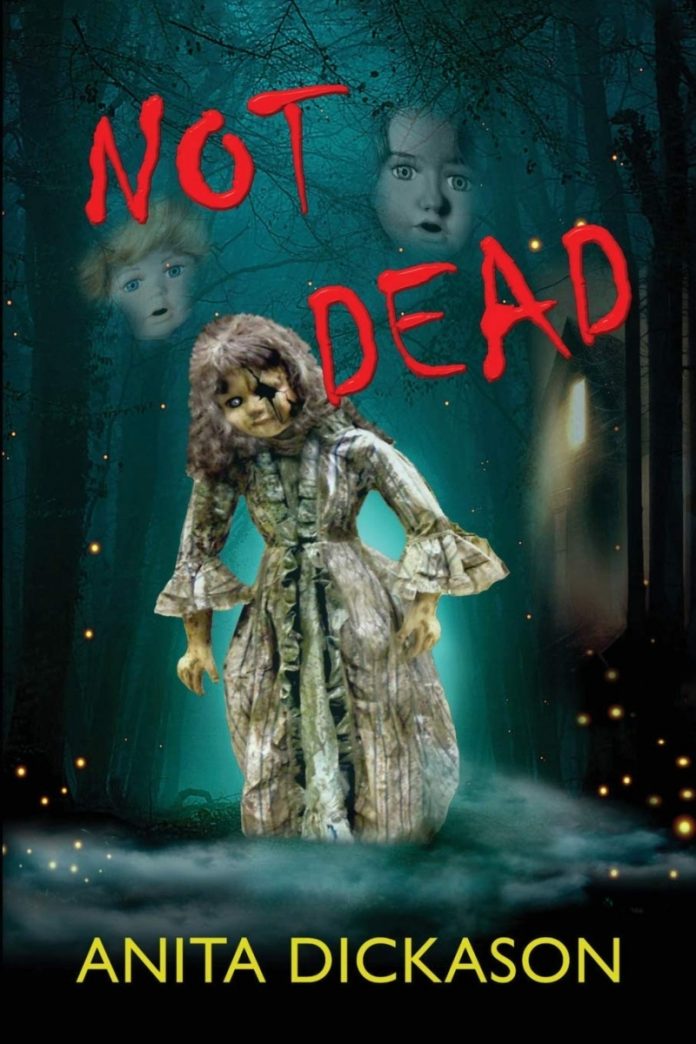 As winter hits, the nights are drawing in earlier and getting darker and cold very quickly, so it’s the perfect time to grab a hot drink, sit down, grab a good book and lose yourself in a good story for a few hours.

A good story for these cold and dark winter nights would be a creepy or scary novel and I was intrigued when I saw the cover of Not Dead by Anita Dickason, it looked perfect and the blurb sounded interesting. That said, I learned a long time ago never to judge a book by its cover, I have read some really great books that have had a poor cover and equally I have read some terrible books with excellent covers (where the artwork is the best thing about the book). With Not Dead I do want to mention the cover, it is excellent and captivating! I think it depicts what the story is about (a lot of books lately don’t give a hint as to what kind of story you are getting), it is quite creepy and the artwork is spot on – but does it match the quality of the story? Read on and find out.

Not Dead by Anita Dickson is crime thriller/police procedural novel with a twist as it has an element of the paranormal. It features “A small-town Texas cop who is haunted by his past. A reporter who risks it all, even her life. A kidnapping that crosses into an unearthly realm.”

In a small Texas town where the highlight of crime is dropping litter, the odd drunken fight or car crash, the new police chief, Chad Bishop, doesn’t have much to deal with. Haunted by his time with a big city police force he his happy with the slower pace of life, that is until a 4-year-old child is abducted in broad daylight from her own garden.

The new editor of the local newspaper, Ashley Logan, happens to be the missing girl’s aunt so has a lot more invested in the case than just another missing child. The new arrival in town is definitely going to make herself known.

As the mystery deepens and the police not getting very far, and the reporter causing lots of bother involving herself in the investigation, the past will come back to haunt Chad and make him question his sanity.

Overall, I found Not Dead to be a very good, well-told creepy and tense story. It is packed with suspense and the authors experience as a police officer comes through adding good depth to the story.

The author captures the reader’s attention from the offset and continues in the same vein throughout the book, dropping in little clues throughout. There is a lot of sexual tension between the two main characters (maybe a bit too much for me, but it works). The story captivates, is intriguing and the addition of the paranormal elements only enhance the story rather than dampen it down (although I do think that without the paranormal element it would still have made a good routine police procedure thriller that I would have be happy to read).

The characters all work very well and are beautifully described, getting you to feel for the good ones and hating the bad ones.

Whilst there is enough suspense, at times I felt some things were all wrapped up a bit too neatly, but these bits were very few and far between.

Anita Dickason’s Not Dead is a very engrossing and intriguing paranormal crime thriller. It is well-written, making it quite a fast read and keeps you guessing right until the end.

And back to my original question, “Does the cover match the quality of the story?” Yes, it does!