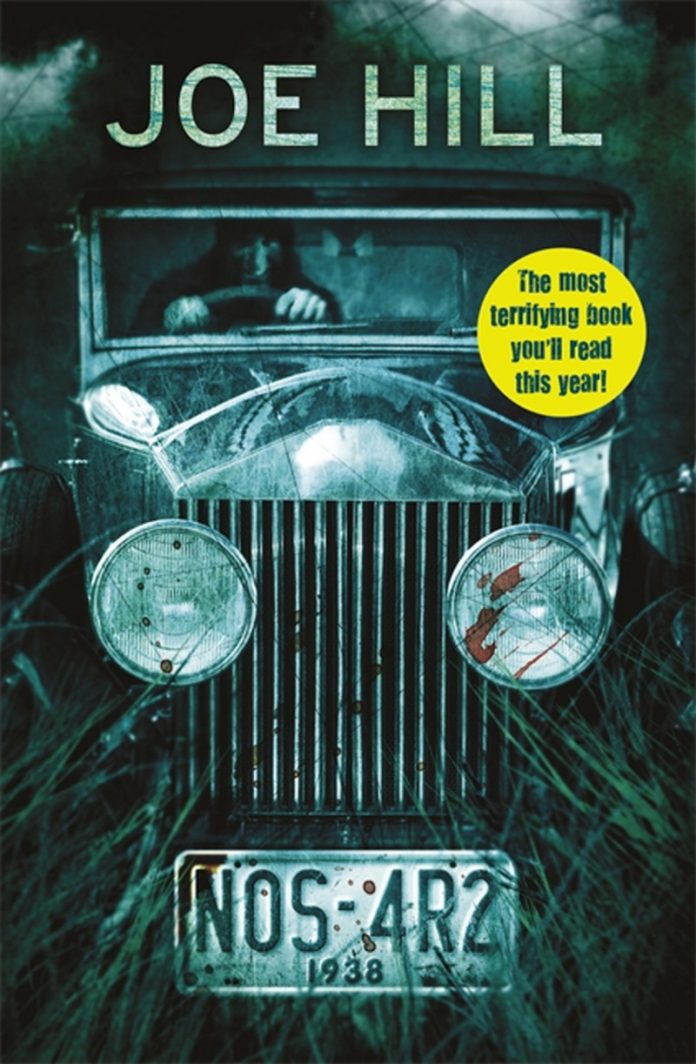 NOS4R2 (aka NOS4A2 and pronounced Nosferatu), published in 2013, is the third novel by Joe Hill. It is the first book I have read by this author after reading references to it in another book by a completely different author, and I’m really glad I did as it is utterly brilliant.

NOS4R2 is a terrifying and thrilling supernatural reimagining of the classic vampire novel.

Christmasland, a place that sounds a happy and delightful place where it is Christmas every day and Christmas Eve every night, a place that everyone would want to visit. But only children can visit Christmasland, arriving in style in a classic 1938 Rolls-Royce Silver Wraith, but to get there they must disappear and never be seen again.

Victoria McQueen has a gift for finding lost things, but not in the conventional sense, she has a bridge that takes her to wherever the lost thing is. With the aid of her bicycle, she can cross the Shorter Way Bridge (Shortaway) and magically appear where she needs to be in the time it takes to get across the bridge, even if that is hundreds of miles away. She keeps this unique gift to herself until she finds out she is not the only one with a very special gift.

Charles Talent Manx III is a serial killer who travels around the United States in his classic 1938 Rolls-Royce Silver Wraith with the personalised number plate (vanity plate) NOS4R2. He is the taker of children, delivering them to Christmasland where they will live forever as children having fun every single day. But by the time they reach Christmasland they are not the same as when they left their own world behind. They become Charlie’s children and are as insane as the serial killer himself.

Only one has escaped the clutches of Manx, the young 17-year-old Victoria McQueen. Her first brush with Manx was a life and death battle that sees Manx put in prison. Whilst that should be the end of the nightmare, it is actually the beginning. Years later, whilst Vic is battling mental health problems, Manx escapes prison and is looking for revenge and finds it by taking Victoria’s own son. It is now a battle of wills and her magic against his. She is desperate to get her son back before Christmasland comes calling, or die trying!

Overall, NOS4R2 is a fantastic novel. Despite its nearly 700 pages it never lets up, never gets dull and there is always something happening without going off plot and losing the story.

Joe Hill has constructed a story with a well thought out plot and sublime characters. It is a supernatural horror thriller with a different take on a vampire story. Christmas has a never had such a terrifying meaning.

Charlie Manx is a brilliant reimagining of a vampire. He is a child taker and murderer. Whilst he doesn’t turn into a bat and fly away, he is of an undetermined age, seemingly cannot die and with the aid of his Rolls-Royce Wraith abducts children and sucks the life out of them. He is a terrifying villain that screams evil from the pages. And his sidekick, Bing, is incredibly creepy and evil (and possibly much more terrifying than Manx himself).

Victoria McQueen is not the classic hero; she is damaged and dangerous, flawed and rebellious but is utterly brilliant. She flies through the pages on her bikes, and is a thoroughly believable and likeable character.

NOS4R2 is a fantastically satisfying and absorbing read. The story is brilliant, and the characters have life. With themes of mental illness, depression and addiction amongst the child abduction and murders, they have been handled well and really do create a story that is packed with energy and pace.

A pulsating read with great characters and a good storyline that makes it a good-old fashioned horror story that you won’t be able to put down. It you like Stephen King, you will definitely love Joe Hill.