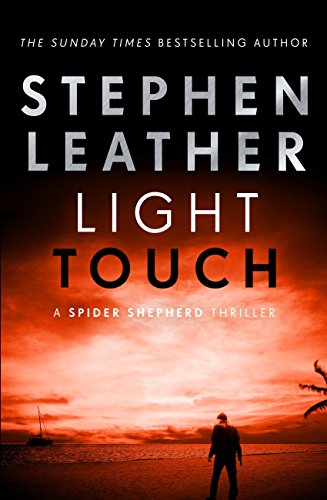 I love reading thrillers by Stephen Leather as they are always fast-paced, absorbing and, of course, thrilling! I have just finished reading the fourteenth novel in the Dan ‘Spider’ Shepherd series; Light Touch.

Dan ‘Spider’ Shepherd is a former SAS soldier who now works undercover for the British intelligence agency MI5. This time he has two investigations on the go; finding out if an undercover cop investigating an international drug smuggler has gone rogue and tracking a SAS soldier, Matt Standing, who is looking for revenge for the death of his sister.

Spider’s first investigation is to get close to an international drug smuggler who is always one step ahead of the law and has never been caught. He has two objectives; to gather evidence on him to put him away and to investigate if a female undercover cop that is now part of his crew has stepped over the line.

His second investigation is to find a serving SAS soldier who has gone rogue and hunting the people responsible for supplying his teenage sister the lethal dose of heroin that killed her.

Overall, as a fan of Stephen Leather, I loved this book. It is very up to date and topical dealing with terrorism, jihadists, drug smuggling and the grooming on teenage girls. It grabs hold and never let’s go. While it does have two main plots, they run alongside each other very well and don’t confuse the story. While both plots were absorbing I found the Standing plot to be far superior, compelling and much more thrilling.

The only issue I had with this book was that they were no chapters, just breaks in the story. That said, it wasn’t exactly a big issue and I would still rate Light Touch as 5/5.

Thrilling, well-written and a fast-paced read.