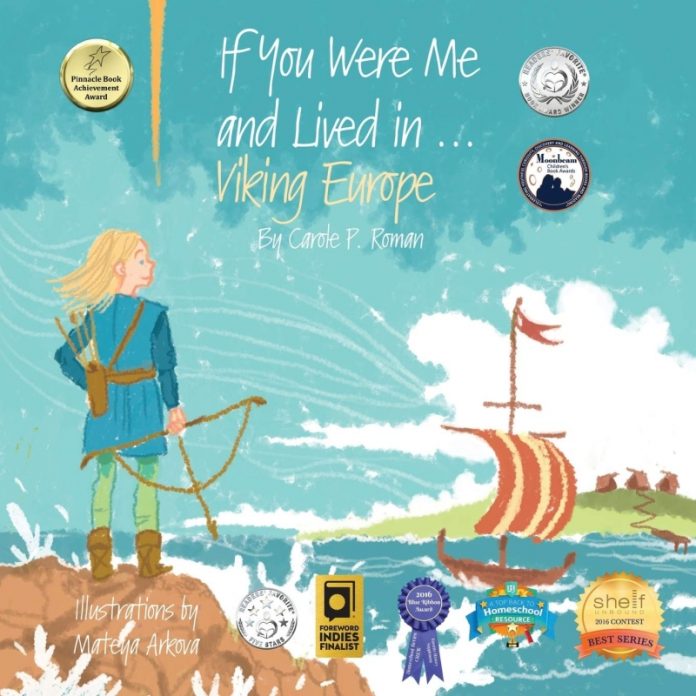 Vikings, the Norse seafarers and warriors who travelled the seas in their longboats. Sounds quite idyllic doesn’t it? In actual fact, Vikings were over-romanticised and could be quite brutal and devastating. Viking means ‘pirate raid’ in a language called Old Norse (although this book says it comes from the word bay or creek or means overseas expedition) and they spent their time raiding and colonising large parts of Europe, including Britain, from the 9th to the 11th century. A lot of us will have learned everything we know about Vikings from television, but how much do we really know?

Carole P. Roman is an award-winning author of more than 50 books and has written a fabulous series that looks at different countries and their cultures in her If You Were Me and Lived in… series. They started off introducing children aged 4-8 years old to other countries and cultures but later expanded for older children, adding in ancient civilisations, suitable for 8-11 years old. She has made looking at history much more interesting and accessible for children to take a look at some of these ancient civilisations in here If You Were Me and Lived in… series of books.

In If You Were Me and Lived in… Viking Europe we travel back in time over 1100 years to the year 870 AD to take a look at the Vikings. Rather than focus on the plundering and conquering of other towns and countries, the book focuses more on what it would be like growing up in a Scandinavian village (probably in Norway) and told through the eyes of a child.

The Vikings were from the northern part of Europe in the Scandinavian countries of Sweden, Denmark and Norway. Whilst they are known for their raids and plundering of foreign places, they were also brave explorers, settlers, experienced traders, excellent farmers and very skilled craftsmen.

The last few pages of the book are a reference section with a handy list of Norse gods and important Vikings in history, featuring a brief description of each person. There is also a glossary at the back that lists the unfamiliar words, their meaning and child-friendly pronunciations.

The illustrations have been created by the very talented Mateya Arkova. They seem to have been well researched to fit the time period that they are supposed to represent and have been drawn beautifully in a cartoon kind of style with fuzzy edges and pastel colouring. The illustrations do an excellent job of enhancing the story being told.

Overall, If You Were Me and Lived in… Viking Europe gives a very good vision of what it would be like living in Scandinavian Europe and the Viking civilisation. It is suitable for children 8 years old and above and is packed with interesting facts about Viking life, mostly at home rather than their conquests. A non-fiction, factual history book that children will actually enjoy reading. The facts are short so are not overwhelming for young readers and they will get a taste of what life would have been like then.