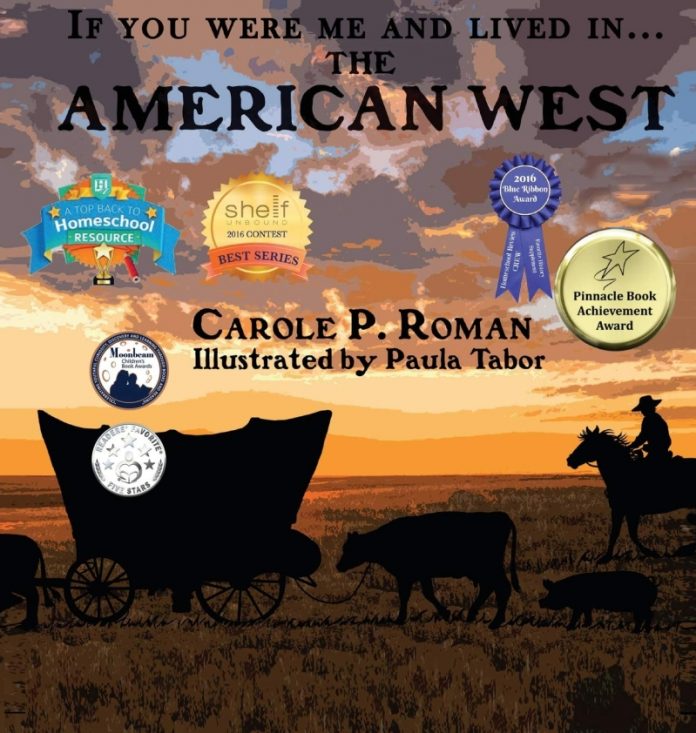 Whilst we can’t hitch those wagons and hit the Wagon Trail for the American West (lockdown wouldn’t allow it anyway!), children can read about the trek from East to West in search of a better life in If You Were Me and Lived in… The American West, written by Carole P. Roman.

Carole P. Roman is a prolific children’s author, writing picture books, chapter books, joke books and more and has won over 100 awards. The If You Were Me and Lived In… series is a series of educational children’s books that originally introduced children to different cultures around the world, with the latest additions to the series having expanded to now introduce children to ancient civilisations and time periods.

If You Were Me and Lived in… The America West is another adventure back in time, complete with cowboys and Indians (Native Americans)!

The If You Were Me and Lived In… series of books are written for children to introduce them to different time periods and cultures of world history. If You Were Me and Lived in… The American West sees us travel back in time to 1843 and the American West and the story is told through the eyes of a child. The story is told by a 12-year-old child from 1843, giving an account of what it was like growing up then. It gives a unique history lesson with basic facts all delivered in a fun and easy way to digest.

It has been beautifully illustrated by Paula Tabor, bringing the story to vivid life. The story takes us back onto the “Wagon Trail” which was a result of people hitching up a wagon to their horses along with their entire belonging and migrating West due to flooding in the East, all in aid of a better life.

The book contains a wealth of information and covers basics such as children’s names that were common of the time, what kind of clothing they would wear, what food they ate, travelling through some harsh weather conditions, meeting native Indians, their schooling and work life and, of course, their customs. It also tells the tale of how when they reached their final destinations how land was built on and farmed and how this in turn created small towns. It is much more than a “Cowboy Western”.

As with the other books in this series, at the back of the book are also 2 pages featuring names and information about famous people that helped to shape “The American West”, some you will know more than others, such as the sharpshooter Annie Oakley, the explorer and pioneer Daniel Boon, Geronimo the leader of the Apache Indian tribe as well as lawmen Wild Bill Hickok and Wyatt Earp.

The book is also finished off with a glossary explaining the meaning of some words in the book that children would be unfamiliar with and their pronunciations.

Overall, If You Were Me and Lived In… The American West is a fun and educational book to learn a bit more about world history and different culture and is an excellent starting point for children to learn about the history of the American West.

If You Were Me and Lived in… Germany by Carole P....