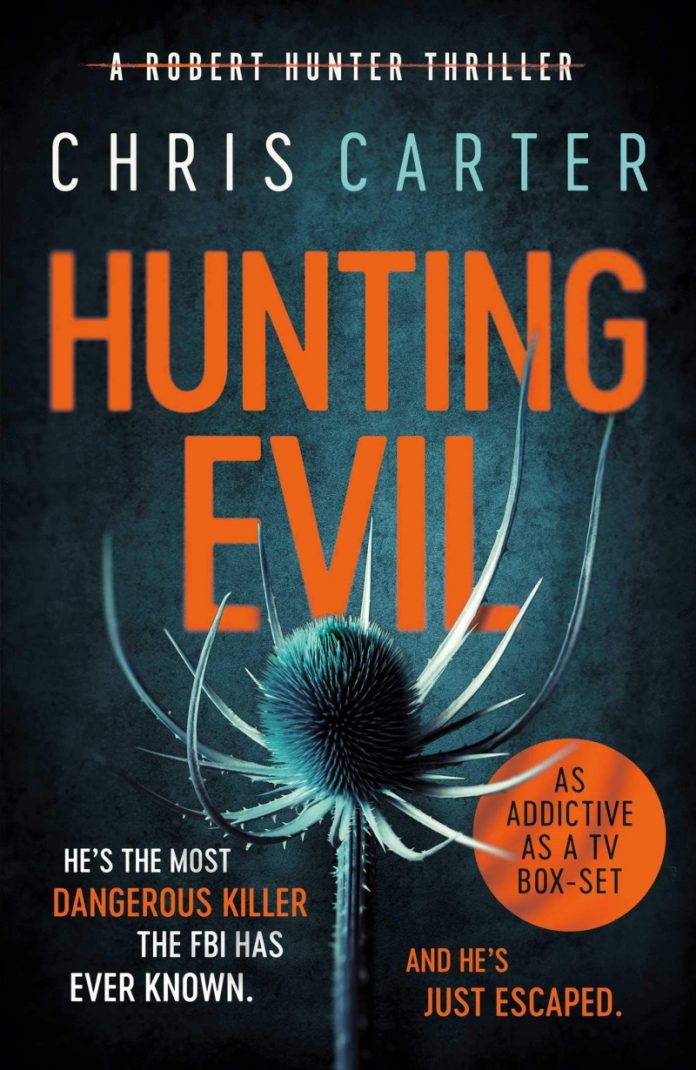 Hunting Evil, by Chris Carter, is the tenth book in the Detective Robert Hunter series and the sequel to An Evil Mind (book 6).

Detective Robert Hunter is the head of the LAPD’s Ultra Violent Crimes Unit, a special section of Robbery-Homicide that only deals with the most violent crimes especially serial killers and high-profile murders. He has tracked and caught some of the worst offenders in the United States, including his old college friend and prolific, very dangerous and sadistic, serial killer Lucien Folter.

Lucien has been locked up for 3½ years but has managed to escape from prison and is looking for revenge against Hunter, who he sees as the person who ended his “research” into serial killers.

Hunter and his team must now try to track the deadliest, smartest and most devious killer the FBI has ever known. With 2 of the greatest minds against each other it is going to be who can outsmart who to survive.

Overall, I’m a big fan of Chris Carter and love this series and Hunting Evil continues the series in the same gripping fashion. As Chris Carter has a background in criminal psychology, he certainly knows how to bring out the best in his criminal characters as well as the heroes.

Lucien is an excellent villain who can manipulate his appearance, voice, mannerisms and people around him with ease. He is completely narcissistic, a sadist, a true psychopath and has some very creative ways to kill people.

While I very much enjoyed this best, this time around I thought there was too much repetition and over describing of certain scenarios (and quite close to each other, sometimes the next paragraph or page) and some things were wrapped up just too neatly. That said, it was still a great read with some great action, gruesome murders and some good twists.

For me, this isn’t the best in the series, but it is still definitely worth a read. While it is the sequel to An Evil Mind, I don’t think that it reading it first makes too much difference (although I would highly recommend reading all of the series first – you won’t be disappointed).

Hunting evil is very much a gripping, intense psychological thriller with great characters that will draw you in, but too much repetition has turned what could have been a great book into a good book.