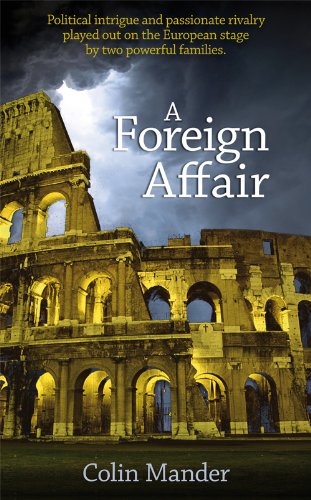 Politics and thrillers, two topics that go hand in hand. Throw in two powerful families from two different countries, a powerful pharmaceutical business, a European financial crisis and you really do have an explosive political thriller. This is the basis of Colin Mander’s A Foreign Affair, a story that spreads from the quiet and quaint English countryside to the grandeur city of Rome, Italy.

The Boston’s run a family pharmaceutical business in England. Matthew Boston has just taken over at the helm of the business, Boston and Wood, after his parent’s retirement. When his friend and employee David Steinberg starts to develop a revolutionary new drug to help reduce heart attacks, and one that will put the company in the spotlight and launch them into global success, it seems that nothing could possibly go wrong.

Anna Boston is Matthew’s wife. She is a frustrated housewife raising their two children whilst her workaholic husband spends most of his time growing his beloved business. But she has a secret, and when her husband’s company grows and expands its operations near her family’s home just outside Turin, she sees a way to change her life for the better. Her father is Paolo Medina (an influential player in the socialist movement gathering momentum in Italy). He lives in Italy with his wife Bella and his glamorous younger daughter Gina (she is loved by the paparazzi and grabs the headlines when she’s spotted with her celebrity love interest).

This is the tale of two families, whose fates seem inevitably tied to the changing face of the European Union. A story of personal and political relationships where hearts are broken, friendships are destroyed, millions are made and where one man sets in motion events that could alter the course of European politics forever.

Overall, I found A Foreign Affair to by a very intriguing political thriller. Written before Brexit it follows two very powerful families and their opposing views and the financial crisis around Europe. It was a book that I struggled to put down and it really kept my interest from the first to last page.

It is a very gripping and exciting read and deals with the collapse of the banking system, recession in Europe, countries going bankrupt (very relevant to the situation that was happening at the time, it was written in 2011 and before that dreaded word – BREXIT). It gets to the point of Italy pulling out of the EU and the European Army invasion of Italy. It is an excellent political thriller following the power struggles between two families, politicians and countries.

Colin Mander’s A Foreign Affair is a thoroughly enjoyable read. It powers along at a fast pace with several plot twists along the way, making it very hard to put down. It is very well written and easy to read with some excellent characters. Combing business, politics, family feuds, fact and fiction it has everything a good political thriller needs. It is very topical, especially with Brexit still on everyone’s minds, and a story that is entirely believable.

A very engaging, exciting and energetic read about pharmaceuticals, power and politics. It might have been written 10 years ago, prophesising events that could happen with countries leaving the EU (which as we all now know did happen, for better or worse), but it is still very relevant today.

Catch Me by Lisa Gardner Review