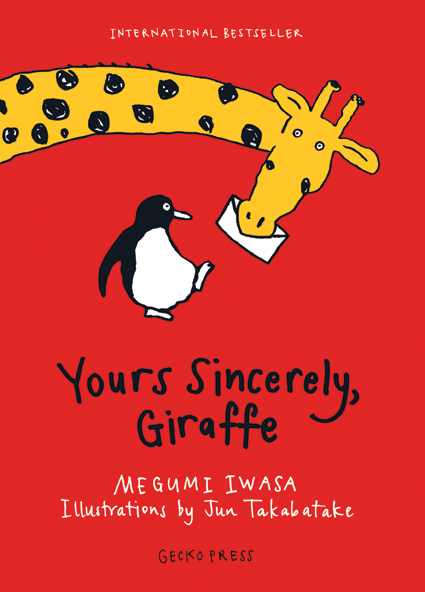 When I was in primary school, a long time ago, we were encouraged to have a pen pal (for any younger readers, we didn’t have email, Facebook or Twitter – and we survived). We were paired up with a child from another school in the UK and each week we had to write our new friend a letter. This was partly to make new friends and partly to practice our language & communication skills, handwriting and letter writing skills. Whilst having a pen pal is not such a big thing today, with text messages, email and social media at the touch of our fingertips, it still does exist and is a very good way to make new friends (just remember to practice safe writing), and to learn more about other countries and cultures from around the world. Yours Sincerely, Giraffe by Megumi Iwasa is a book about having a pen pal, a delightful and charming story about a bored giraffe who is looking for a friend.

Giraffe spends his days wandering the beautiful sun-baked African savanna. The savanna provides him with plenty of food and he spends his days eating leaves from the highest trees. Whilst he is well fed, he is terribly bored. He does the same day after day and the repetition is getting to him, he really wants a friend.

Also out on the African savanna is Pelican. Pelican is also bored but is a bit of an entrepreneur and is in the process of setting up a new business: Pelican Post. Pelican Post is offering mail deliveries anywhere in the world!

Giraffe spots a sign offering the deliveries and it is a big change in his humdrum world. He starts pondering what other animals there are over the horizon, in places that he has never visited. He decides that he will write a letter to find out.

The following morning, he writes his letter. He goes off and finds bored Pelican and asks him to deliver his letter to the first animal he sees over the horizon. Pelican readily agrees, he is overjoyed that his new business has its very first customer, after all the horizon isn’t too far away is it? Pelican soon discovers that the horizon is a lot farther than Giraffe or Pelican realised and it takes an age to get there. The letter finally ends up in the hands of Penguin, with the help of mail carrier Seal.

Penguin is delighted to receive the letter and it is the start of a blossoming friendship with Giraffe and Penguin becoming pen pals and relieving the boredom, but it is a pen pal friendship full of misunderstandings.

Now Giraffe has never seen a penguin before, and vice versa. Giraffe lives on the hot savanna plains and Penguin lives in an icy, cold world. So as they are writing to each regularly, Giraffe tries to deduce what Penguin looks like by asking lots of questions and trying to build a picture of Penguin in his own mind, with the ultimate aim of dressing like him and going to pay a visit. As Giraffe hasn’t any idea of what a penguin looks or anything to base it on, he inevitability misunderstands and gets it wrong. 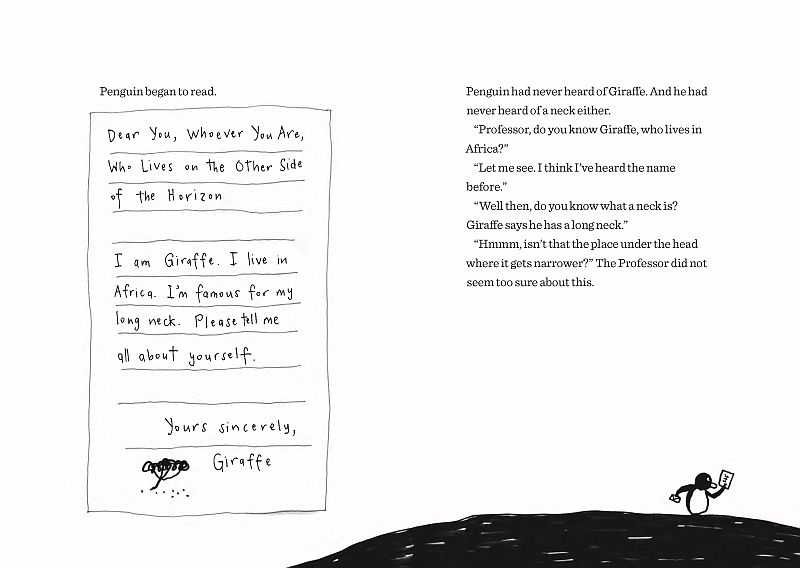 Yours Sincerely, Giraffe is a charming and delightful illustrated story written as a collection of letters between the two animals that will leave children aged 6 years plus (and adult readers) with a smile on their face. It is a simplistic story about friendship, curiosity and misunderstanding, but a charming and endearing one.

The story is about building new friendships, the importance of good communication and how important the written word is and how the readers interpretation of it can lead to very innocent misunderstandings.

It is a fun story where we have Giraffe trying dress like an animal he has never seen before. How can you dress like something you have never seen from a very basic description in a written letter? It also sees Penguin asking questions like “What is a neck?” and “Why doesn’t he have one?”

It teaches its young readers that it doesn’t matter what shape or size you are, what colour you are, or that if you look different from others you can still be the best of friends and get along, even with someone from a different country or culture.

The book also features simple line drawings, illustrated by Jun Takabatake, to really bring the best out of the story.

Yours Sincerely, Giraffe is an excellent story about friendships, hard work, misunderstandings and taking the time to learn about others and appreciate their differences that will leave a smile on your face and warmth in your heart.

Jesper Jinx and the Turkish Pepper by Marko Kitti Review