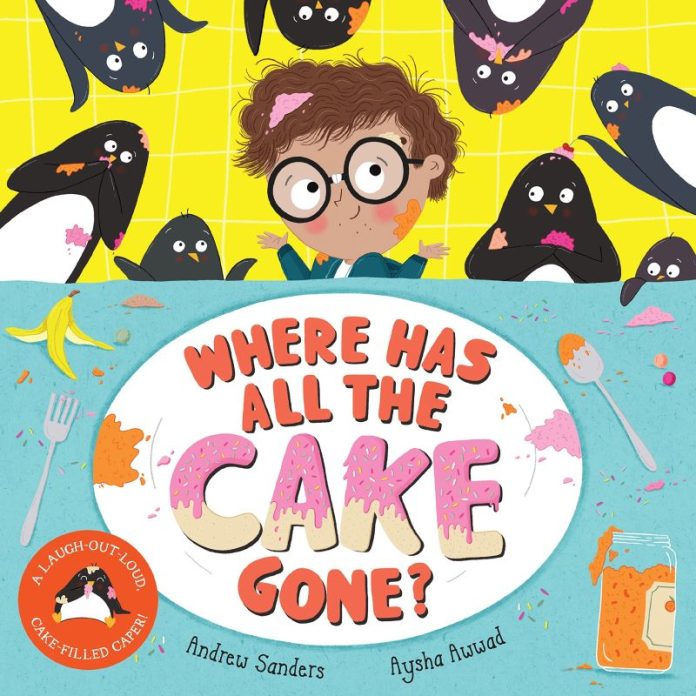 Cakes, I love cake as I would imagine lots of people do, especially children aged 3 to 5 years old. My favourites cakes are London Cheesecake, chocolate fudge cake and good quality iced finger buns. Whenever I do buy some cake, it seems to disappear quite quickly, and I’m nearly positive that it can’t possibly be me eating it all that quickly. After reading Where Has All The Cake Gone? I’m starting to think that I could be correct, and it could be conceivable that criminal child abducting, cake stealing penguins are eating it all – what do you think?

Where Has All The Cake Gone? is written by Andrew Sanders and illustrated by Aysha Awwad. It is a hilarious children’s picture book story about a missing cake and one very imaginative boy’s explanation as to how it went missing.

A crime has been committed in the kitchen – the cake has been eaten and just crumbs remain on the plate! The police haven’t been called in to investigate but Dad is trying to get to the bottom of where all the cake has gone and asks his son, Albert, if he has eaten it. Then the story gets really interesting. Albert is adamant that it wasn’t him that ate the cake and concocts a preposterous tale about a group of penguins that kidnapped him, took him to France on a train whilst trapped in a giant jar of marmalade before having a snowball fight with some kangaroos and then celebrating by eating all the cake. His story is so out there, could Albert really be telling the truth about who ate all the cake and why? If he is, I think these penguins have also been visiting my kitchen and I want my cakes back!

Overall, Where Has All The Cake Gone? is a hilarious story that children will laugh out loud when reading it. Albert has such a fantastical vivid imagination that you really do have to stop and think if there really are criminally-minded penguins roaming about kidnapping children, taking their abductees on international travel and attacking other animals before returning the child home and eating the family cake even when told not to. As tall tales go, Albert’s must be one of the biggest, but could it actually be true?

This is a really warm and funny story about a young boy with a MASSIVE imagination (although it could be argued that he stole a cake, ate it and lied about it, unless the penguin story is true of course). Truth or lies, it’s a great funny picture book story that is a delightful read (and you could also talk with your readers about how theft and lies are wrong and have a discussion about it).

With it being a story about being in the kitchen and baking cakes, it is good to see that stereotypes haven’t been used. Instead of Mum being in the kitchen, it is Dad standing their with his tea towel and wearing an apron who then helps his son bake a new cake.

As it is a picture book, that means there are lots of illustrations to go along with the story. It has been superbly illustrated in a fun bright and colourful way by Aysha Awwad. The illustrations really help young children visualise Albert’s imagination, making his tale jump out of the pages and giving it life (although fingers crossed not too much life as we need to keep those cake-loving penguins at bay).

A warm and funny 32 page picture book that readers just can’t help but enjoy and laugh along with Albert’s imaginative explanation. Just remember, next time that you buy some cake, keep an eye out for any pesky pilfering penguins as they might just be up to no good.

Wonderbly Where Are You? Save the Multiverse! Review

Jesper Jinx and the Mouse Mayhem by Marko Kitti Review