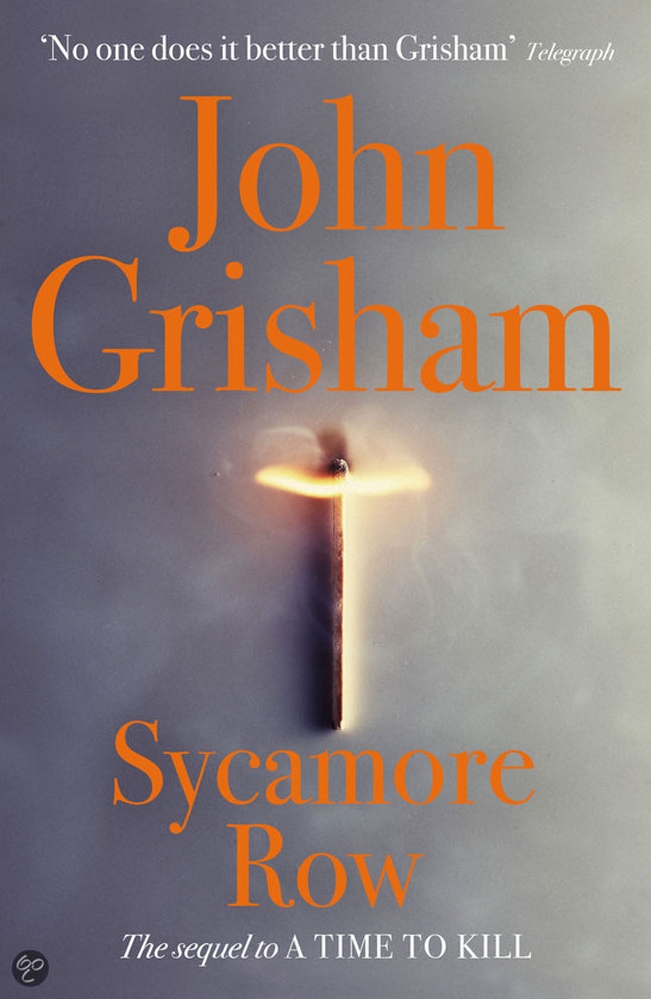 If you are looking for a good legal thriller then you really can’t go wrong with a novel written by John Grisham. Not only does he write legal thrillers for adults, he also writes them for children as well (and I think the Theodore Boone children’s series is quite good!). Since 1988 the lawyer and author has written a book every year with nine of them being turned into very successful and entertaining films, including A Time to Kill, The Firm, The Pelican Brief, The Client etc.

His first novel A Time to Kill is one of my favourite films, the first book in the Jake Brigance series and very popular in both formats. Sycamore Row is the sequel to A Time to Kill and the second book in the Jake Brigance series, written more than 20 years later after the first and goes back to where it all started – the infamous courthouse in Clanton, Ford County.

Sycamore Row sees Jake Brigance return to the courthouse setting in Clanton, a small town in Mississippi brimming with racial tensions. After successfully defending a black man accused of murder, he is back in court in a fiercely controversial trial that will force Ford County to confront its tortured history.

The reclusive, untrusting and very wealthy Seth Hubbard is dying of lung cancer. He has some trusts issues, he doesn’t trust anybody! In a lot of pain, but determined to go out on his terms, he hangs himself from a sycamore tree. Whilst his suicide is a shock for the residents of Ford County, a new handwritten will be an even bigger one and is the beginning of the legal troubles for others. His new will raises a lot more questions than it answers: had his chemotherapy and painkillers affected his ability to think clearly? What does it all have to do with a piece of land once known as Sycamore Row? Why would Hubbard leave nearly his entire fortune to his maid? This new will embroils his adult children, his maid and Jake in a new courtroom battle.

One day after the suicide of Seth Hubbard, Jake Brigance receives a package from the deceased man himself. This package contains a copy of his new will with instructions on how Jake should execute it. Jake had never met, or even heard of, Seth until the letter named Jake as the attorney for his estate which left nothing to his children or grandchildren, but leaves 90% of his massive fortune to his black housekeeper, Lettie Lang. Mississippi, in America’s deep south, still has active Ku Klux Klan (KKK), a white supremacist group that caused Jake lots of problems previously, is not going to be happy with a white man leaving his money to a black woman, and neither are Seth’s family, so it is guaranteed that a fight will ensue.

Why would Seth leave everything to his housekeeper? Especially one that he had only known for 3 years. Why would he cut out his own children? A white man in the south leaving everything to his black housekeeper – surely he can’t have been in his right mind – or was he? As there was a previous will leaving everything to his children, which Seth renounces in his handwritten new version, Jake now has a fight on his hands to prove that Seth knew exactly what he was doing, and the Lettie should get the bulk of the estate (in excess of $24 million).

Overall, Sycamore Row is nothing short of brilliant. John Grisham writes excellent pulse-pounding, intense legal thrillers and Sycamore Row, despite being written more than 20 years after its predecessor, does not disappoint. Set just 3 years after Jake’s exploits in A Time to Kill, it is exciting, packed with tension, lies, secrets and not a single page of this 447 page novel was disappointing. Whilst the first half of the book is spent building up a picture of the compelling characters, making them really come alive, the second half of the book featuring the courtroom battle really livens up.

Sycamore Row is an excellent, sensational and superb courtroom drama that also deals with the politics of racism in America’s Deep South from the 1930’s to 1988 (and still going on today to some extent). It is packed with plenty of twists, turns and subplots keeping you entertained and glued to the pages. If you have read A Time to Kill, or seen the film, the characters that we know, love or hate, such as the deplorable Harry Rex Vonner and the drunkard Lucien Willbanks, are back and they will always keep your attention.

Whilst it is a sequel to the popular A Time to Kill you do not need to have read it (or seen the film) to follow the story. Sycamore Row is a superb story in its own right and is a tension packed, thrilling read.

For Your Own Protection by Paul Pilkington Review