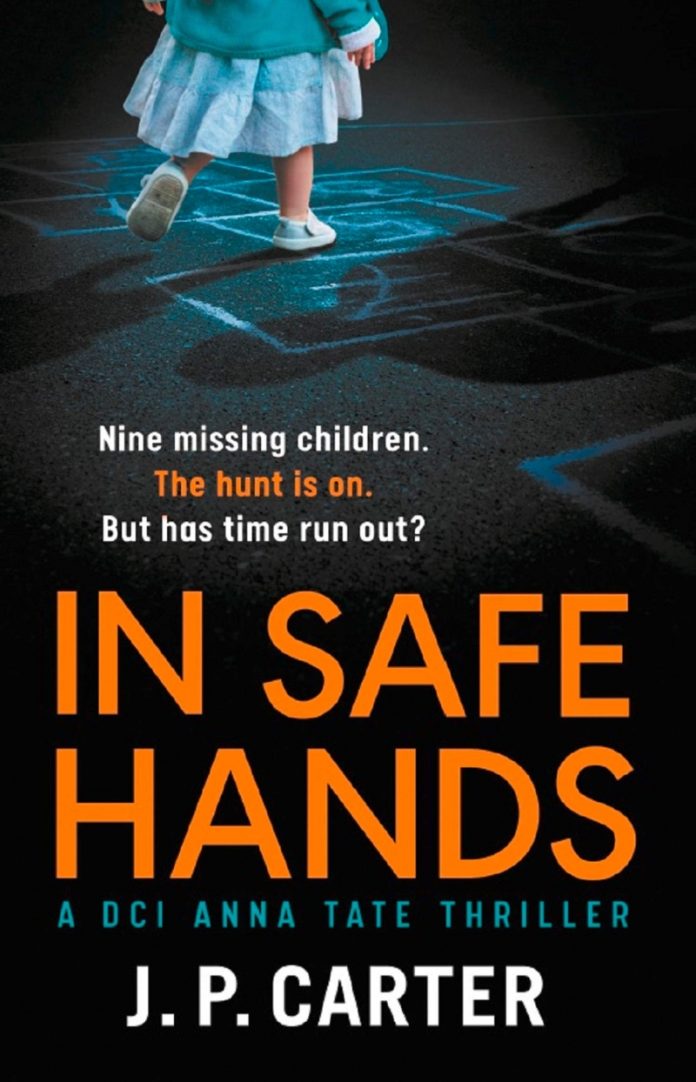 Be careful who you trust with your children…

Crime and police procedural thrillers are all the rage these days. They are exciting, fast paced and absorbing reads. After all, crime isn’t something that most of us get involved with so reading about it is pure escapism.

I like reading thrillers that are part of a series with a central character that you can follow on their adventures and escapades, on either side of the law. So when I was asked to read At You Door by J. P. Carter, I agreed although I hadn’t heard of this author before, but knew I had to read the book one in the series first, In Safe Hands, so ordered a copy and I wasn’t disappointed.

In Safe Hands is the first in the DCI Anna Tate thriller series – She is a South London police detective with the Major Investigation Team (MIT), based in Wandsworth.

9 children, 4 boy and 3 girls aged between 3 and 5 years old, are abducted by 3 armed men from a nursery school in South London. No one in the quiet suburban street has seen anything. The police have nothing to go on except for a note that states:

THE KIDS HAVE NOT BEEN HARMED – YET

After a ransom of six million pounds in demanded before children start to die, the race is on for DCI Anna Tate to find the kidnappers and recover the children unharmed. Convinced that someone close to the children is lying, it is going to one of the most difficult and disturbing cases she has had to work on, especially as one of the children already has a life-threatening illness.

Overall, In Safe Hands in a fantastic, gripping thriller about mass child abduction from somewhere that you would assume your children would be safe. The story is well-written and packed with tension and suspense right from the first few pages right up to its climatic ending.

It has plenty of secrets, twists and turn (and a good twist at that) and really is unputdownable – it took me less than a day to read. It keeps you on your toes, while you dismiss the obvious answers only to be surprised when they are revisited later in the book.

The story is also interspersed with DCI Tate’s backstory and her quest to find her own missing daughter who was taken 10 years previously by her ex-husband, making the kidnapping of 9 other children of a similar age more troublesome for her.

In Safe Hands is a fantastic read, well-written with a great central character and one that I can highly recommend. I am now off to read the second in the series At Your Door (released August 2019).

J. P. Carter (aka Jaime Raven) is an author I will definitely be reading more of.