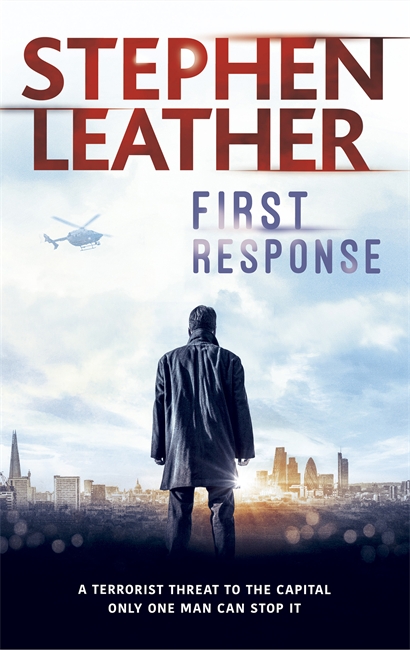 In First Response, by thriller writer Stephen Leather, terror comes to the streets of London in the form of 9 suicide bombers!

First Response sees 9 suicide vest wearing terrorists taking hostages in London and threatening to blow them up if their demands are not met.

On the 10th anniversary of the 7/7 terrorist attacks in London, 9 cleanskin (people with no obvious affiliations with a terrorist organisation, not necessarily known to the Security Services and are not on any anti-terror watch lists) suicide bombers are at 9 different locations throughout the city (a church, shopping centre, post office, nursery school, coffee shop, pub, bus, restaurant and an MP’s office). They handcuff themselves to a hostage at each location. All wearing a suicide vest they demand that 6 ISIS fighters are released from Belmarsh Prison by 6pm or they will detonate the vests and blow themselves and the hostages up.

Superintendent Mo Kamran of the Special Crime and Operations branch of the Metropolitan Police is put in charge of the operation to prevent the bombers from carrying out their threats. With the help of armed police, SAS, bomb disposal and other emergency services Kamran has the biggest job of his career that seems to have a deadly outcome no matter what choices he makes, but everything is not as clear cut as it seems!

Overall, First Response is a first rate, exciting and pulsating thriller. With terrorist plots and actions a very real worldwide issue at the moment this novel has been expertly written and is very plausible. From the first to last page there is non-stop action, suspense and thrills with twists and turns to hide the terrorist’s true intentions.

First Response is a fantastic, explosive and engrossing read, Stephen Leather at his very best! A very hard to put down thriller.

For more information on Stephen Leather and his books visit www.stephenleather.com.

The Missing by C.L. Taylor Review