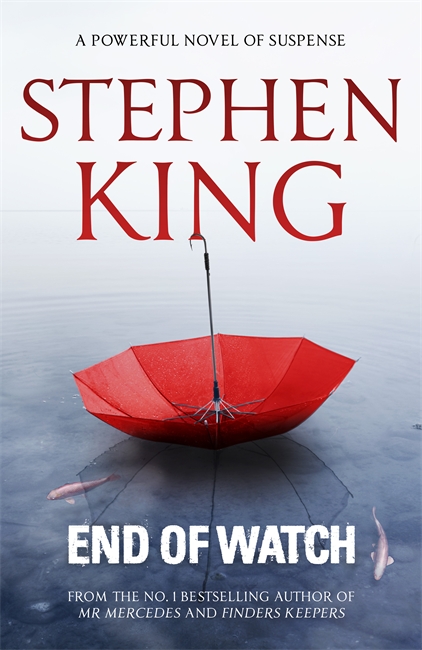 Stephen King’s End of Watch takes the Bill Hodges Trilogy to an exciting and different level.

End of Watch by Stephen King is the third and final part of the Bill Hodges trilogy (Mr Mercedes, Finders Keepers and End of Watch).

Brady Hartsfield, aka the Mercedes Killer, is back and looking for revenge. In the first of the Bill Hodges trilogy we see Brady kill and injure scores of people at a job fair before trying to kill thousands of teenagers at a concert before being stopped by Bill, Holly and Jerome – an unlikely trio of friends.

Brady is currently confined to Room 217 of the Lakes Region Traumatic Brain Injury Centre, known as The Bucket by staff, and is an unresponsive condition, or so he would like you to believe. He is under the care of Dr Babineau who has been feeding him experimental drugs that may, or may not have, helped Brady awaken with deadly new powers of control that can cause havoc, mayhem and death without him ever having to leave the confines of his room.

Bill Hodges is now a retired detective running a private investigation firm, Finders Keepers, with business partner and friend Holly Gibney. When Bill receives a telephone call from his old detective partner inviting them to the crime scene of an apparent murder/suicide that has ties to Brady and the Mr Mercedes case they find themselves investigating their most dangerous and unbelievable case yet! Brady Hartsfield is somehow involved although no one quite believes it as he never leaves the hospital and is thought to be in a persistent vegetative state.

Brady wants revenge and with the aid of a games console, technology and his new found powers he wants to kill as many as he can, partly to punish Bill and partly to fulfil his own twisted desires.

When a rash of suicides start to occur they all link back in some way to Brady, and Bill along with Holly and Jerome must find out how Brady is doing it while trying not to get sucked into Brady’s little game and ultimately their own demise.

Overall, End of Watch is the best of the Bill Hodges trilogy. I found it written at a much faster pace and a lot more thrilling with some of the Stephen King magic of telekinesis and mind control.

The characters are all superb although this time Bill has a deadly secret of his own to hide. With time against them Bill and friends must stop Brady and the mysterious Dr Z before a lot of lives are destroyed, including their own.

End of Watch, while part of a trilogy, can be read as a standalone novel but I would recommend reading the 2 previous novels to fully enjoy the story and the superb, thrilling writing of Stephen King.

I loved Mr Mercedes and Finders Keepers and End of Watch is the icing on the cake, Mr King has saved the best until last taking the trilogy out on a high.