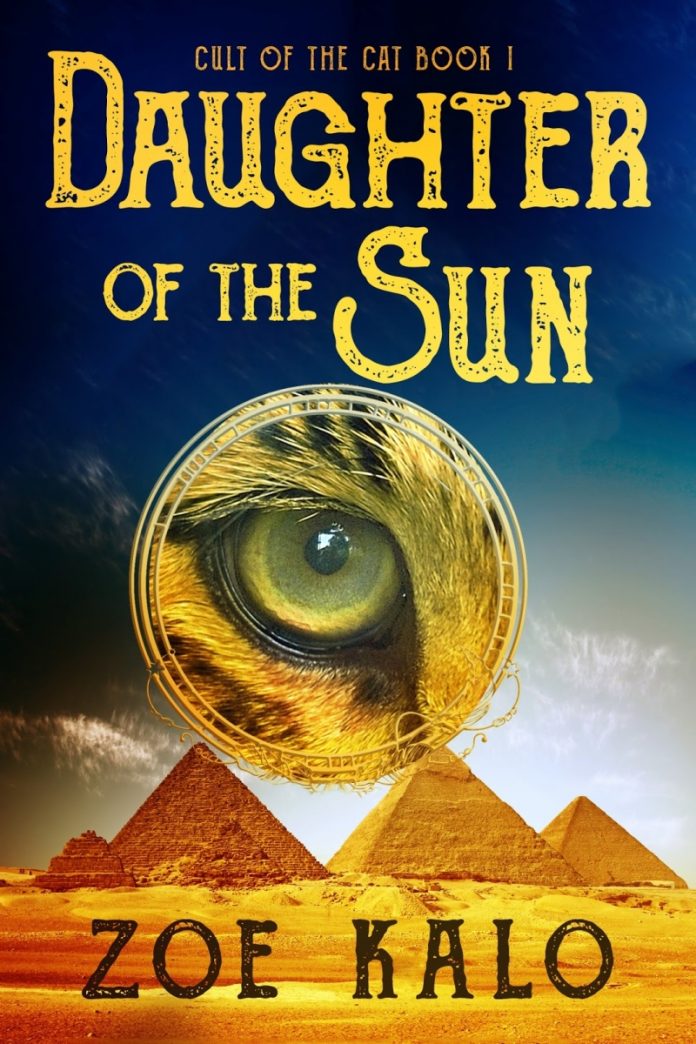 The school holidays are in progress, the sun is shining (at the minute for most anyway) and for the kids it is time to relax and take things a bit easier. What better way to do so than to chill out in the garden with a good book? If your preferred reading material features fantasy, magic, mystery and even a bit of history then Daughter of the Sun by Zoe Kalo is an excellent, thrilling read. Whether you are a teenager, young adult or even an adult this is definitely a book that you will enjoy!

What is Daughter of the Sun? Well, it isn’t a book about a spoiled teenager laying around by the pool topping up their tan. Daughter of the Sun is the first in the Cult of the Cat series of YA (Young Adult) books and is a mythological fantasy novel by Zoe Kalo. Mythological fantasy stories are not my go to reading material, but I love to read anything that sounds interesting and after reading the blurb, the synopsis sounded intriguing, so I gave it a try and wasn’t disappointed.

The story is focused on a troubled teenager who was born during a total solar eclipse. 16-year-old Trinity is an orphan that was left on the doorstep of an English countryside convent soon after birth. With no idea who left her there, no relatives could be traced so she was raised by the nuns in the convent. With an anger / temper problem that could cause her problems and get her into trouble at times she led a relatively uneventful life. But a few weeks before her 17th birthday, which happens to fall during a lunar eclipse, her life was going to change.

Dr Nassri arrives at the convent with the exciting news that Trinity has a grandmother. The grandmother wants Trinity to go and live with her and she is soon whisked away to a small island off Istanbul to be reunited with her. This island is called Kedilerin Ada, also known as the Island of Cats.

But something strange and bizarre is happening on the Island of Cats and Trinity is going to play a big part in it.

Trinity should be happy that she now has a grandmother, one that she never knew existed and one that wants to see her. But before they can speak, her grandmother dies leaving Trinity an orphan once more. In limbo again, she has Dr Nassri and her daughter Ara for company.

With her grandmother gone and alone again, Trinity can now find some answers as to how she became abandoned. She wants to discover where she came from, the mystery of the piece of ancient papyrus she was left with when left at the orphanage, her strange dreams and the weird behaviour of 1000 cats on the island. She soon discovers ancient Egyptian gods, goddesses, demons, curses, her bizarre developing feline abilities and a path that has very dangerous consequences.

Overall, whilst mythological fantasies are not my usual reading material, I loved reading this book. Once I got into it, it was very hard to stop reading it! It is a well-written story with a good intriguing plot. It brings ancient Egypt to the modern world with its exciting story. Teenagers and adults alike will be thrilled with a story that unfolds at a good pace.

With themes of abandonment, foster care, loneliness, teenage hormones and change, readers will be enthralled with the character of Trinity. Not only has she experienced problems with being an orphan, being naïve to the world as she was raised by nuns, her emerging teenage hormones and her developing cat like prowess she remains a strong and tenacious female lead character throughout the book, one that knows her own mind and what she wants.

Combining mythology and ancient Egypt into a modern teenage life should be quite difficult but Zoe Kalo has written it in such a fashion that it works extremely well. The mixing of ancient Egyptian gods, goddesses and demons, ancient languages and curses with a modern teenager and their different kinds of issues gelled together well and I found it very enjoyable, not too overpowering or overblown.

The story builds at a very good pace with a good plot and a central character who brings a typical hot-headed, impatient teenage to life.

The only issue I had with the story was I felt that it ended too abruptly, I just wanted to keep reading and know more! But it is the first in a series, so there will be plenty of scope in subsequent stories to find out more.

This is a YA thriller that is different from the normal teenage angst and finding themselves. It is definitely one that I think will hold the attention of teenagers and young adults (and even the older readers) and it will certainly keep you entertained.

Daughter of the Sun is an intriguing novel and a good enjoyable read. It is full of energy, with lots of cats, and is a great start to the rest of the Cult of the Cat series.