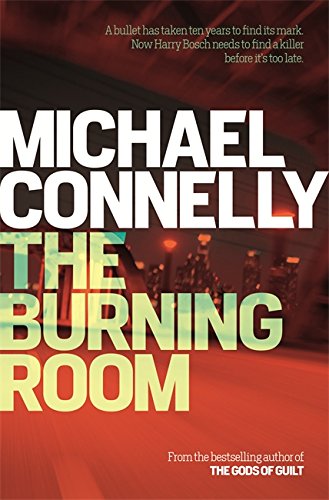 If you like watching crime thrillers, then you may have watched the Bosch series, starring Titus Welliver, on Amazon Prime Video. This series is based on the books my Michael Connelly, and in my opinion whilst the television show is very good, the books are much better.

The Burning Room by Michael Connelly is book number 17 in the successful Bosch series.

Hieronymus Bosch, aka Harry, the detective and not the Dutch painter, is an investigator with the LAPD’s Open-Unsolved Unit. His job involves the investigation of old and unsolved cases and his latest case is rather unusual as the victim took 10 years to die before being deemed as murder.

10 years after 31-year-old Orlando Merced, a member of a mariachi band, was shot in what at the time was believed to be stray bullet from a gang shooting, he dies from complications caused by the bullet that was lodged in his spine. Bosch and his rookie new partner Detective Lucia ‘Lucky Lucy’ Soto are tasked with investigating the unsolved case even though, unusually, the body is still fresh, the shooter is long gone, and any other evidence is virtually non-existent.

Now that the police have the bullet and designated the shooting as a case of murder, Bosch sets out to find a killer in what is going to be a very difficult, highly charged and politically sensitive case involving some very powerful players. Was the shooting random or a pre-planned murder attempt?

Whilst investigating this case, Bosch and his new partner are also assigned the case of a decades old fire in a day-care centre that killed 9 children alongside one of a large cash robbery of a check cashing business. It makes for very busy times for Bosch and Soto with three uniquely different cases, especially as Soto has no homicide experience.

With pressure from the press, the Chief of Police and even the ex-mayor they have to do their very best to solve the cases even with the very little evidence available. With Bosch fast approaching retirement, he is trying to train the rookie Soto, who has lots of potential, so that she came become an excellent detective.

Overall, I really enjoyed The Burning Room. It might be book number 17 in a long running series, but it has lost none of the excitement and thrills of the previous books in the series, the writing or story hasn’t got tired, whilst the characters and the story is as good as they were in the first novel.

The Burning Room is a crime thriller that travels along at a fast pace and with very different highly charged cases for Bosch to investigate it stays glued to your hands, you will not be able to put it down.

Hieronymus ‘Harry’ Bosch is an excellent character and feels very real. The introduction of a new partner in Lucia ‘Lucky Lucy’ Soto injects new life into the series, keeping the series fresh and enjoyable so it doesn’t go stale and repetitive.

This is a well-written novel that has been very well thought out. It has some excellent unexpected twists and turns that will keep you turning the page.

Michael Connelly is a master of crime novels. His Harry Bosch character is a gritty detective that is great to read, and The Burning Room is definitely one to lose a good few hours in.