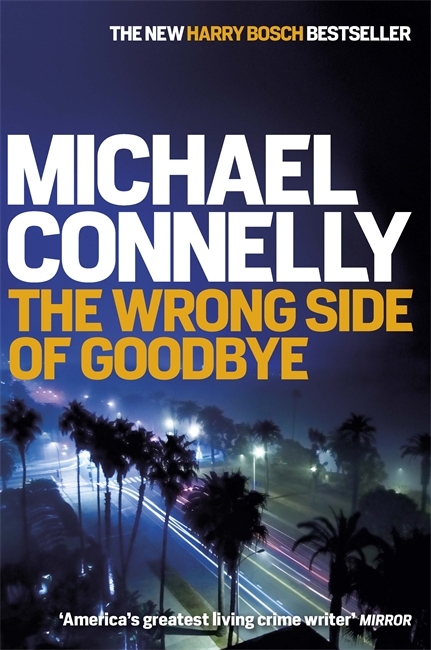 I love the Bosch novels by Michael Connelly, they are not about the Dutch painter Hieronymus Bosch but LAPD Detective Hieronymus “Harry” Bosch (although he was named after the painter). In the 19th novel of the Bosch series, he is back for another crime solving thriller in The Wrong Side of Goodbye.

Harry Bosch, once of the LAPD, has now retired but has not completely given up his badge as he is now working as reserve police officer for the tiny San Fernando Police Department. This is a part time position, and an unpaid one. He is helping them to try and clear up their old cold cases. Alongside this position, he also holds a Private Investigator’s license to enable him to take on his own private cases (where he does get paid).

In The Wrong Side of Goodbye, Bosch is working on two cases that he wants to solve: one for the San Fernando Police Department (SFPD) in the hunt for a serial rapist known as the Screen Cutter and a private case to find an heir to a vast fortune. Both are going to be dangerous cases!

In the Screen Cutter case there is a very clever rapist on the loose and the police are at a dead end with no suspects.

With his private investigation, Bosch is asked by Whitney Vance, an 85-year-old billionaire, to see if he can find an heir to his vast fortune. When he was 18 years old, Vance had an affair which resulted in a pregnancy, but soon after becoming pregnant she disappeared. With Vance realising that he won’t be around too much longer, after all he is 85 years old, he hires Bosch to see if the child was born and if so, was it indeed alive. He needs an heir to inherit his fortune. Bosch is the only person he can trust to discreetly investigate as there will be people determined to stop an heir from taking control of his money and business.

With $6 billion fortune on the line, Bosch knows this case will be dangerous for him and any possible surviving relative but needs to find the truth as the case takes him back to his own time in Vietnam.

Overall, the Bosch series is excellent. This is book #19 so clearly the series has stood the test of time and hasn’t gone stale and this is another great book in the Bosch series. The series has been so popular that it has even been turned into a television series starring Titus Welliver.

The premise of Harry being forced out of the LAPD and not wanting to give up life as an investigator, taking on unpaid police work and private investigations is brilliant, it keeps his story fresh.

Although the book has two plot lines they blend together well and are easy to keep track of, both exciting enough to keep you turning the page for more. Although Harry is getting older his thirst for justice is still the same and with each investigation, gives it his all.

Whilst the story builds, the first part of the book goes at a slower pace until Bosch gets further into his investigations, but as he gets closer to the truth, the story picks up pace and gets more and more exciting. I didn’t find it as thrilling and as previous novels in the series, but it is still a great, well-written read with some good plot twists that keep you thoroughly absorbed in the story.

The Brethren by John Grisham Review